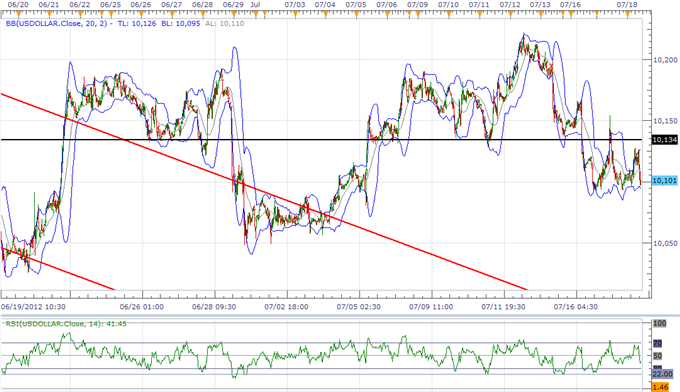 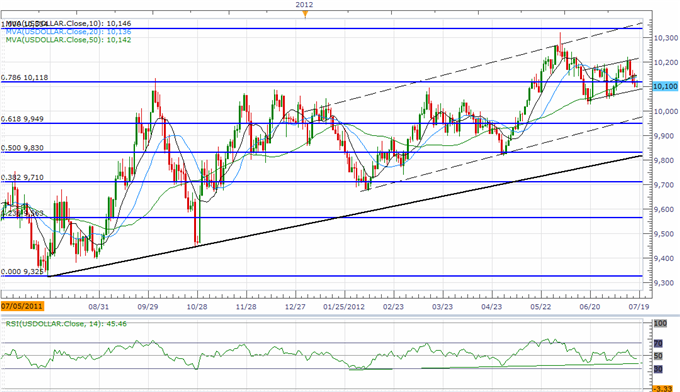 As we’re watching the short-term ascending channel within the broader trend, the dollar looks poised for a move higher, and we will retain our bullish forecast for the USD as the Fed looks to carry out its current policy. Although Fed Chairman Ben Bernanke kept the door open to conduct implement additional monetary stimulus, it seems as though we will need to see a material risk for another recession for the FOMC to push through another large-scale asset purchase program as the central bank sees the economic recovery gradually gathering pace in the months ahead. In turn, we should see the Fed carry out ‘Operation Twist’ throughout the remainder of the year, and the central bank may refrain from expanding its balance sheet further as the economy gets on a firmer footing. In turn, we will continue to look for fresh yearly highs in the index and the bullish sentiment underlining the dollar should gather pace in the second-half of the year as the FOMC holds a more upbeat outlook for the U.S. economy.

The greenback weakened against two of the four components, driving by a 0.20 percent rally in the Australian dollar, while the Japanese Yen gained 0.19 percent as it continues to benefit from positive real interest rates in the world’s third-largest economy. Indeed, the Bank of Japan Minutes revealed that the central bank is looking at other options as the board maintains its pledge to pursue powerful monetary easing, but it seems as though the BoJ will continue to sit on the sidelines over the near-term as the fundamental outlook for the region improves. As currency traders scale back bets for more easing, the recent decline in the USDJPY may gather pace over the remainder of the week, and we may see the pair make a run at the June low (77.65) as the exchange rate struggles to push back above the 200-Day SMA at 79.02.