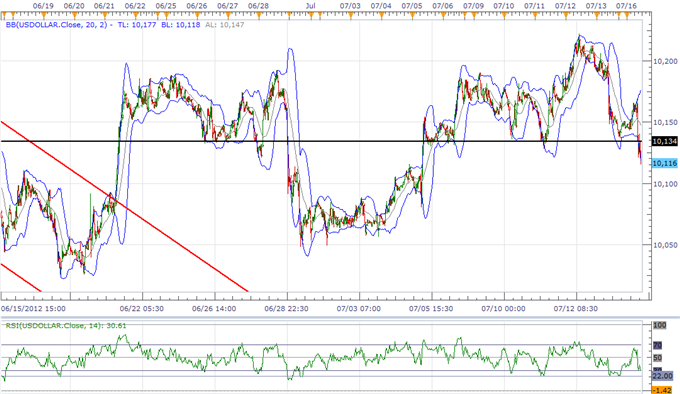 Although the Dow Jones-FXCM U.S. Dollar Index (Ticker: USDollar) remains 0.31 percent lower from the open, we’re seeing the 30-minute relative strength index hold above 30, and the lack of momentum to push into oversold territory may produce a short-term correction ahead of the major event risks on tap for later this week. In turn, we should see the dollar work its way back towards the 10,200 figure, but the greenback may face range-bounce prices ahead of Fed Chairman Ben Bernanke’s testimony as currency traders weigh the outlook for monetary policy. Indeed, the dismal U.S. Advance Retail Sales report raised speculation for additional monetary support as private sector consumption remains one of the leading drivers of growth, and the central bank head may keep the door open to expand the balance sheet further in an effort to stem the downside risks surrounding the region. 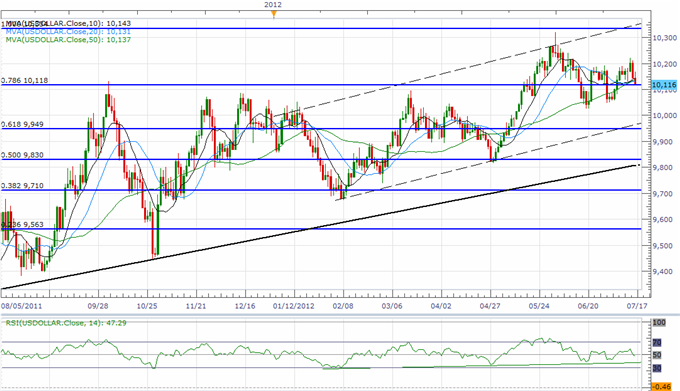 At the same time, it seems as though Atlanta Fed President Dennis Lockhart, who also serves on the FOMC this year, is leaning towards more quantitative easing as it ‘has been an option on the table,’ but we should see the committee continue to carry out its current policy for the time being as central bank officials look for a stronger recovery in the second-half of the year. As the USDOLLAR holds above the 78.6 percent Fibonacci retracement around 10,118, we may see the index carve out a higher low around the key figure, and we are still looking for another run at 10,300 as the upward trend continues to take shape. Beyond the Bernanke testimony, we will also be keeping a close eye on the Fed’s Beige Book due out on Wednesday as the International Monetary Fund curbs its forecast for the world economy. Should the central bank survey instill a weakened outlook for the world’s largest economy, the fresh batch of data may heighten expectations for additional monetary support, and the dollar may come under increased pressure as market participants continue to look for another round of quantitative easing.

Once again, the dollar weakened across the board on Monday, led by a 0.56 percent rally in the Japanese Yen, and the USDJPY may track lower this week as positive real interest rates in Japan increases the appeal of the low-yielding currency. As the Bank of Japan is scheduled to release its meeting minutes later this week, the central bank is likely to reiterate its pledge to pursue power monetary easing, but it seems as though the BoJ will refrain from expanding its asset purchase program as policy makers raise their outlook for the region. As the USDJPY breaks below the 200-Day SMA (79.00), the pair looks poised to retrace the rebound from June (77.65), but a less dovish statement from Fed Chairman Bernanke may spark a short-term reversal in the exchange rate, and the policy outlook will continue to heavily influence the pair as the Fed and BoJ keep the door open to expand monetary policy further.