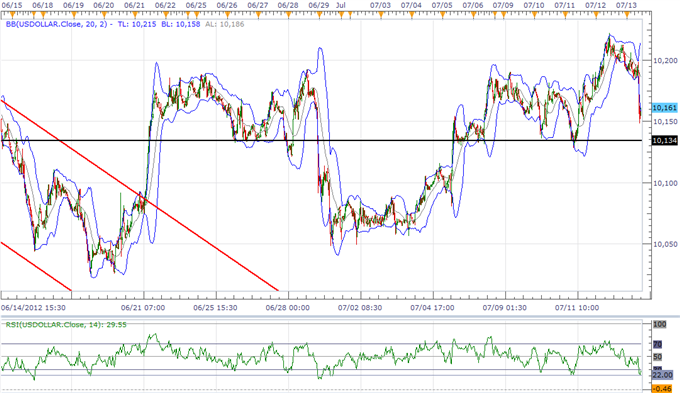 The Dow Jones-FXCM U.S. Dollar Index (Ticker: USDollar) is 0.46 percent lower on the day after moving 114 percent of its average true range, and we may see the reserve currency make another run at the October high (10,134) as market sentiment firms up. However, the rebound in risk-taking behavior is likely to be short-lived amid the heightening turmoil in the euro-area, and we may see the flight to safety gather pace in the week ahead as European policy makers struggle to restore investor confidence. Indeed, we will be watching the 30-minute relative strength index as it dips into oversold territory, and we may see the dollar consolidate over the remainder of the day as the oscillator approaches interim support. Nevertheless, as market participation thins ahead of the weekend, we will continue to look buy dips in the greenback, and the inverse head-and-shoulders pattern may continue to take shape next week as the developments coming out of the world’s largest economy continues to dampen the scope for another large-scale asset purchase program. 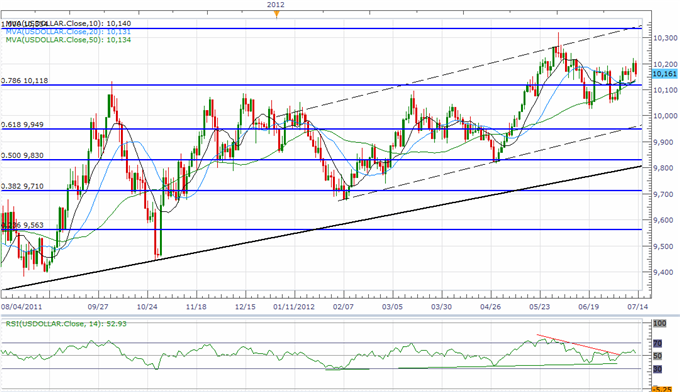 As the USDOLLAR continues to hold above the 10 (10,139), 20 (10,131), and the 50 (10,134) day moving averages, the incline across the SMA’s instills a bullish outlook for the greenback, and we should see the index recoup the losses from June as heightening price pressures in the world’s largest economy dampens speculation for more easing. Indeed, the uptick in the U.S. Producer Price Index raises the prospects of seeing the consumer price report top market expectations, and the stickiness in underlying inflation should prop up the dollar as the economy gets on a more sustainable path. At the same time, the Fed’s semi-annual monetary report may also prop up the greenback as the central bank softens its dovish tone for future policy, and we may see Chairman Ben Bernanke talk down speculation for QE3 as growth and inflation picks up. In turn, we should see the upward trend channel continue to take shape in the second-half of 2012, and the dollar remains poised to mark fresh yearly highs as it carves out a higher low coming into July.

The dollar weakened across the board on Friday, led by a 0.74 percent rally in the British Pound, and the GBPUSD may continue to retrace the decline from earlier this month as the central appears to be nearing the end of its easing cycle. Indeed, the Bank of England announced that its new lending program may boost private sector credit by at least GBP 80B, and the measure may dampen expectations for more quantitative easing amid the stickiness in underlying inflation. Indeed, the U.K.’s Consumer Price report is expected to show the core rate advancing 2.5% in June following the 2.2% expansion during the previous month, and the growing threat for inflation should prop up the GBPUSD as it limits the MPC’s scope to expand its balance sheet further.