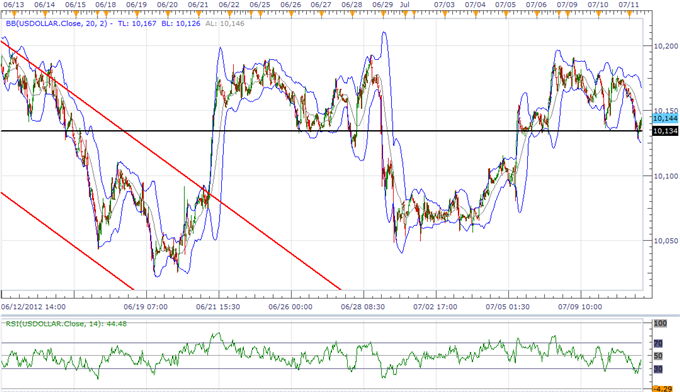 Although the Dow Jones-FXCM U.S. Dollar Index (Ticker: USDollar) remains 0.30 percent lower on the day, the FOMC Minutes on tap for later today may prop up the greenback as the central bank appears to be moving away from quantitative easing. The fresh batch of central bank rhetoric should set the tone for the remainder of the week as market participants weigh the outlook for monetary policy, and we may see the Fed talk down speculation for additional monetary support as the world’s largest economy gets on a more sustainable path. In turn, we should see the inverse head-and-shoulders pattern continue to take shape, and we would like to see the index clear the 10,200 figure to reinforce our bullish outlook for the USD. However, if the language suggests that an increased number of the committee is leaning towards another large-scale asset purchase program, the development may negate our call for a stronger dollar, and we may see the greenback threaten the June low (10,025) as investors raise bets for QE3. 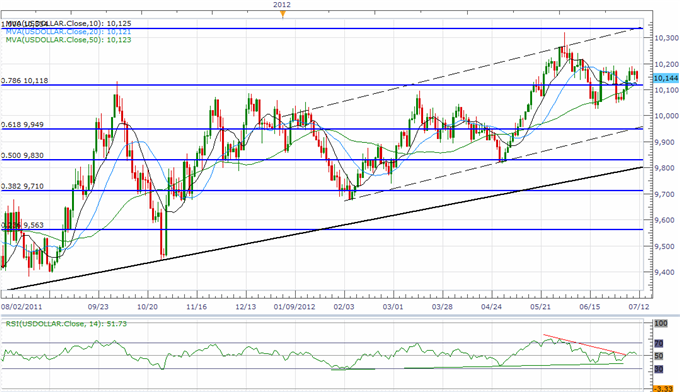 As we have a higher low in place, the near-term outlook for the USDOLLAR remains tilted to the upside, and we may see a bullish breakout in the index as the Fed appears to be bringing its easing cycle to an end. Beyond the FOMC Minutes, we will be closely watching China’s 2Q GDP report as it’s supposed to show the slowest pace of growth since the first three-months of 2009, and a dismal development may sap risk-taking behavior as it casts a weakened outlook for the world economy. As a result, there’s speculation that the People’s Bank of China will continue to embark on its easing cycle in an effort to stem the risk for a ‘hard landing,’ but the region may struggle to prop up the slowing recovery as the sovereign debt crisis continues to drag on global growth. As the flight to safety gathers pace, we should see the dollar continue to benefit from safe-haven flows, and we are waiting to see another run at the 10,300 figure amid the series of higher lows paired with higher highs.

The greenback weakened against nearly all of its major counterparts, led by the 0.64 percent rally in the Australian dollar, while the sterling continued to recoup the losses from the previous week as it maintains the range-bounce price action carried over from June. We should see the GBPUSD continue to track sideways ahead of the Bank of England Minutes on tap for the following week, but the policy statement may spark a bullish reaction in the British Pound as the central bank appears to be nearing the end of its easing cycle. BoE dove Adam Posen argued that the MPC has done ‘enough for now’ during a newspaper interview, and went onto say that commercial banks have become too cautious on lending as region remains in a technical recession. In light of the recent comments, its seems as though the committee will revert back to a wait-and-see approach over the remainder of the year, and we may see a relief rally in the GBPUSD should the central bank talk down speculation for additional asset purchases.