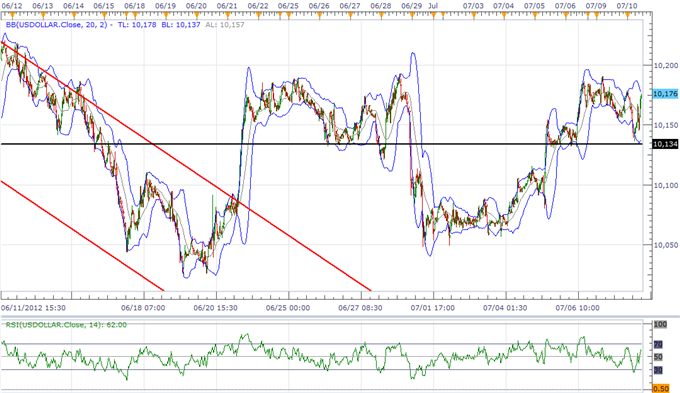 USD To Hold Range Ahead Of FOMC Minutes, Further JPY Strength On Tap

The Dow Jones-FXCM U.S. Dollar Index (Ticker: USDollar) is 0.07 percent higher from the open after moving 73 percent of its average true range, but we may see the greenback maintain the narrow carried over from June as the greenback continues to bounce off of the October high (10,134). Indeed, an inverse head-and-shoulders formation appears to be taking shape as the index carves out a higher low coming into July, but we need to see the 10,200 figure give way for the reversal pattern to pan out. However, should the FOMC Minutes fuel speculation for another large-scale asset purchase program, we may see the index threaten the June low (10,025), and a break below interim support would dampen our bullish outlook for the USD as the Fed keeps the door to expand monetary policy further. 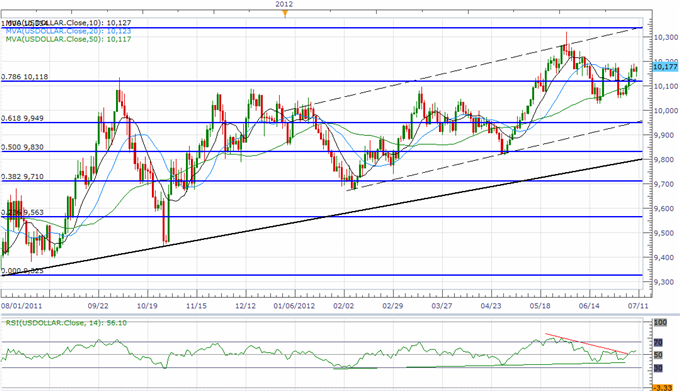 We are likely to see the FOMC maintain a cautious outlook for the world’s largest economy amid the slowing recovery, but it seems as though the Fed is moving away from quantitative easing as the committee votes to extend ‘Operation Twist.’ Indeed, St. Louis Fed President James Bullard, who’s serves as an alternate member on the FOMC, said the central bank would do more only if the fundamental situation deteriorates further, and talked down speculation for QE3 as monetary policy remains appropriate for the current environment. Although we’re seeing a slowing recovery in the U.S., the economy is certainly on a firmer footing as private sector activity gradually gathers pace, and we should see the Fed move away from its easing cycle as the stickiness in underlying price growth raise the threat for inflation. In turn, we are still waiting to see another run at the 10,300 figure, and we should see the upward trend from earlier this year continue to take shape as the Fed softens its dovish tone for monetary policy.

The greenback advanced against three of the four components, led by a 0.50 percent decline in the Euro, while the Japanese Yen advanced 0.11 as market participants scaled back their appetite for risk. As positive real interest rates in Japan increases the appeal of the low-yielding currency, the USDJPY may continue to retrace the rebound from 77.65, and the Bank of Japan interest rate decision may fail to prop up the exchange rate as the central bank preserves its wait-and-see approach. Unless we see the BoJ implement additional measures to stem the marked appreciation in the Yen, we should see the USDJPY track lower ahead of the interest rate decision on Thursday, but the central bank may face increased pressure to further expand its asset purchase program as policy makers continue to look for an export-led recovery.