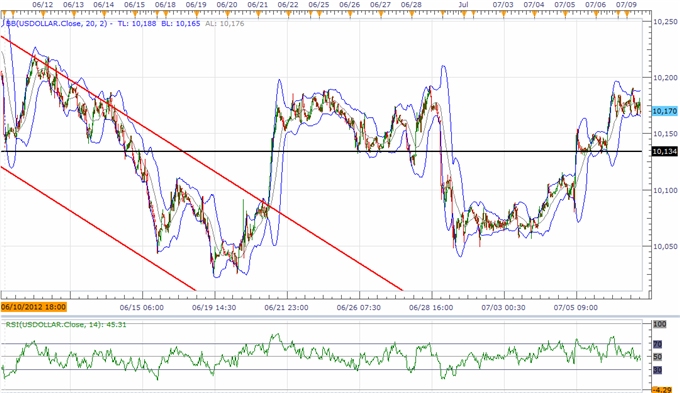 USD Looks To FOMC Minutes For Cues, AUD At Risk On China Slowdown

The Dow Jones-FXCM U.S. Dollar Index (Ticker: USDollar) is little changed from the open after moving only 43 percent of its average true range, and the greenback may hold steady ahead of the FOMC Minutes on tap for later this week as it maintains the narrow range carried over from the previous month. As the 30-minute relative strength index falls back from overbought territory, the series of lower highs and lower lows in the oscillator certainly casts a bearish outlook for the next 24-hours of trading as the index fails to clear the 10,200 figure. In turn, we may see the dollar fall back towards the October high (10,134), but the index may work its way back towards 10,050 as the slowing recovery in the world’s largest economy renews speculation for another round of quantitative easing. 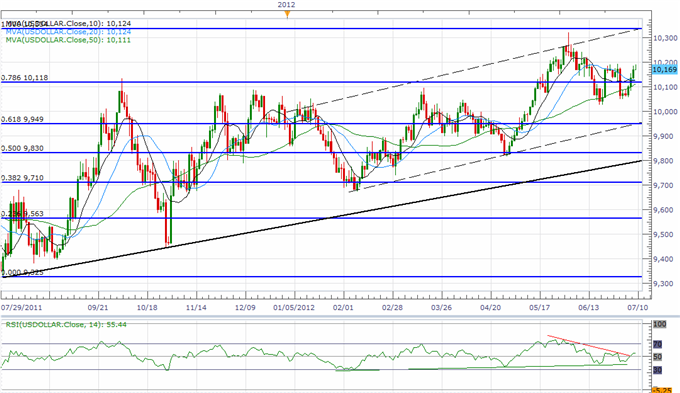 The daily chart continues to highlight a bullish outlook for the greenback as the relative strength index breaks out of the downward trend, and we should see the ascending channel continue to take shape as the reserve currency carves out a higher low coming into July. Nevertheless, Chicago Fed President Charles Evans continued to call for additional monetary support, arguing that the economy needs a ‘high degree’ of accommodation, and Mr. Evans went onto say that the central bank should continue to utilize its balance sheet in an effort to encourage a stronger recovery. As the FOMC keeps the door open to expand monetary policy further, the slowdown in private sector consumption paired with the protracted recovery in the labor market may continue to fuel bets for QE3, but it seems as though the central bank is moving away from its asset purchase program as the committee extends ‘Operation Twist.’ In turn, we will maintain our bullish forecast for the USD, and it seems as though it will only be a matter of time before we see another run at 10,300 as the majority of the FOMC softens their dovish tone for monetary policy.

Three of the four components advanced against the greenback, led by a 0.16 percent rally in the British Pound, while the Australian dollar shed another 0.27 percent as market participants scale back their appetite for risk. As the developments coming out of China – Australia’s largest trading partner – continues to highlight the risk for a ‘hard landing,’ the economic slowdown should encourage the Reserve Bank of Australia to carry out its easing cycle throughout the second-half of the year, and the AUDUSD may continue to give back the rebound from 0.9580 as interest rate expectations falter. According to Credit Suisse overnight index swaps, market participants see the RBA lowering the benchmark interest rate by at least 75bp over the next 12-months, and we will maintain a bearish forecast for the aussie-dollar as the fundamental outlook for the $1T economy deteriorates.