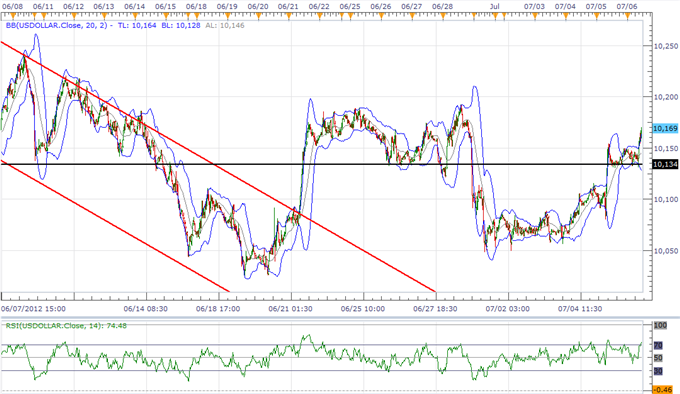 USD To Hold Steady Ahead Of FOMC Minutes, JPY To Take Cues From BoJ

Although the U.S. Non-Farm Payrolls report fell short of market expectations, the Dow Jones-FXCM U.S. Dollar Index (Ticker: USDollar) remains 0.30 percent higher from the open and the greenback may appreciate further next week should the flight to safety gathers pace. However, as the index maintains the range-bounce price action carried over from the previous month, the overbought signal on the 30-minte relative strength index may spark a short-term pullback during the North American trade, and we may see the dollar continue to track sideways ahead of the FOMC Minutes on tap for next week as market participants weigh the outlook for monetary policy. Indeed, speculation for additional monetary support resurfaced amid the protracted recovery in the U.S. labor market, but the uptick in wage growth may encourage the Fed to move away from quantitative easing as the stickiness in underlying price growth raises the threat for inflation. 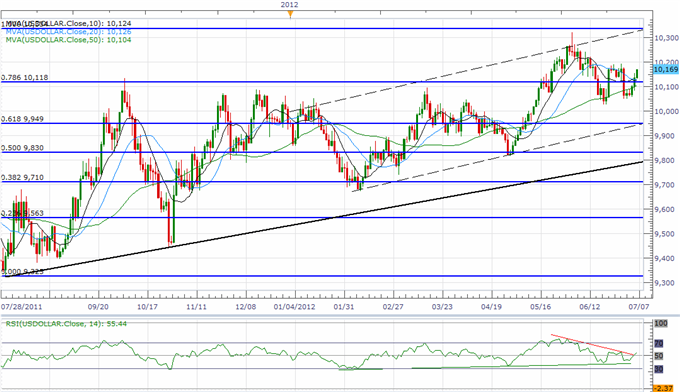 As the USDOLLAR continues to come off of the 10,025 figure, it seems as though the greenback as set a higher low coming into July, and we may see the index make another run at 10,300 as the upward trend continues to take shape. Indeed, the upside break in the relative strength index reinforces our call for a higher dollar, and we may see the FOMC Minutes spark a bullish reaction in the reserve currency should the central bank continue to talk down speculation for another round of quantitative easing. At the same time, the slew of data coming out of China next week may further sap risk sentiment as we’re expecting to see the 2Q GDP report show an annualized growth rate of 7.7 percent, and fears of a ‘hard landing’ may fuel a flight to safety as the outlook for global growth deteriorates.

Once again, three of the four components weakened against the greenback, led by a 0.85 percent decline in the Australian dollar, while the Japanese Yen advanced 0.41 percent. With the Bank of Japan interest rate decision on tap for the following week, we should see Governor Masaaki Shirakawa continue to strike a dovish tone for monetary policy, but the board may continue to endorse a wait-and-see approach as the central bank raises its fundamental outlook for the region. However, as positive real interest rates in Japan continue to increase the appeal of the Yen, we should see the BoJ continue to embark on its easing cycle, and the central bank may come under increased pressure to intervene in the currency market as the resilience in the local currency continues to dampen the prospects for an export-led recovery.