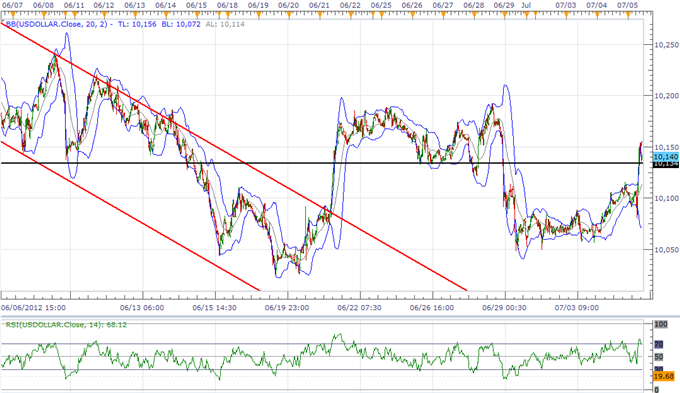 The Dow Jones-FXCM U.S. Dollar Index (Ticker: USDollar) is 0.42 percent higher from the open after moving 121 percent of its average true range, and the dollar may continue to track higher ahead of the highly anticipated Non-Farm Payrolls report as market participants scale back their appetite for risk. Although risk trends continue to influence the currency market, an upbeat employment report may spark a bullish reaction in the greenback as it dampens speculation for another round of quantitative easing. Nevertheless, the oversold reading on the 30-minute relative strength index could bring about a short-term correction in the index, but we may see the dollar move towards the top of its current range ahead of NFPs as the better-than-expected ADP report paired with the drop in initial jobless claims raises the outlook for the U.S. labor market. 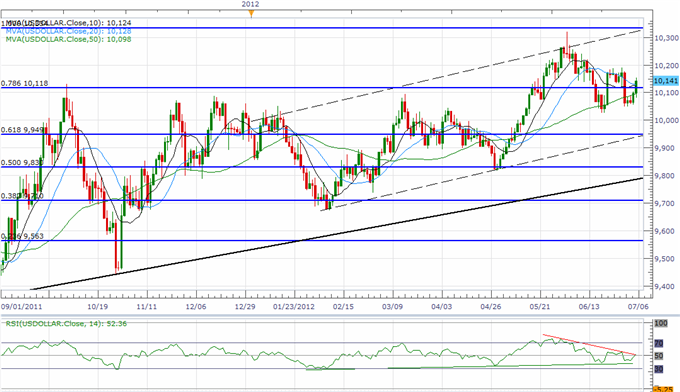 As the USDOLLAR carves out a higher low around the 10,025 figure, we should see the upward trending channel continue to take shape, and it seems as though the relative strength index will break out of the bearish trend as market sentiment wanes. Indeed, the People’s Bank of China surprised the market by cutting the benchmark interest rate by 0.31 percent to 6 percent, and the flight to safety may gather pace throughout the month as China tries to avert a ‘hard landing.’ As the outlook for global growth deteriorates, there’s bets that the Fed will do more later this year to assist the world economy, but a positive NFP report will limit the FOMC’s scope to push through another asset purchase program as the economy gets on a more sustainable path. However, we will be closely watching the jobless rate as discouraged workers continue to leave the labor force, and we are likely to see increased volatility following the fresh batch of data as investors weigh the outlook for monetary policy.

The U.S. dollar rallied against three of the four components, led by a 1.13 percent decline in the Euro, while Australian dollar bucked the trend and remains 0.13 percent higher on the day. Despite the resilience in the AUDUSD, the lack of momentum to push back above the 23.6 percent Fibonacci retracement from the 2010 low to the 2011 high around 1.0360-70 may produce a lower top in July, and we will maintain our bearish forecast for the high-yielding currency as the Reserve Bank of Australia sticks to its easing cycle. According to Credit Suisse overnight index swaps, market participants are still looking for at least 75bp worth of rate cuts in the next 12-months, and we will be closely watching the RSI on the AUDUSD as it remains capped by the 65 figure.