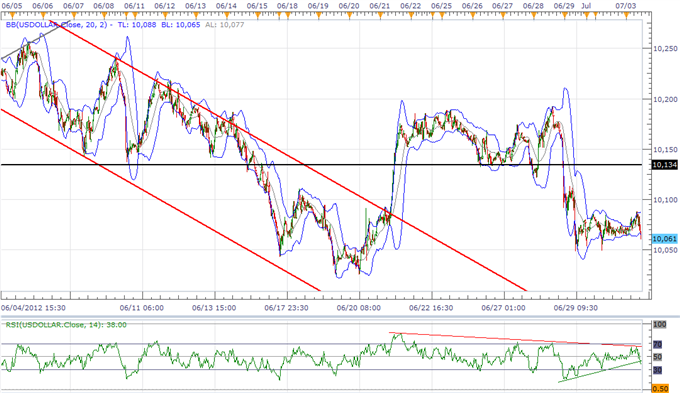 USD To Build Base Through Holiday Trade, QE3 Bets Resurface On IMF

The Dow Jones-FXCM U.S. Dollar Index (Ticker: USDollar) is 0.12 percent lower on the day after moving 42 percent of its average true range, and the greenback may continue to consolidate throughout the North American trade as U.S. investors go offline for Independence Day. As the economic docket remains fairly light for the next 24-hours of trading, we should see risk sentiment dictate price action across the major currencies, and we may see the index work its way back towards the 10,200 figure as it maintains the range-bound price action carried over from June. However, as market participation wanes, we may see choppy price action on Wednesday, and the dollar may track sideways going into the end of the week as the highly anticipated Non-Farm Payrolls report comes into focus. Nevertheless, we will be keeping a close eye on the 30-minute relative strength index as it remains stuck within a wedge formation, and the oscillator could be foreshadowing a major move in the index as it appears to be carving out a higher low above the 10,000 figure. 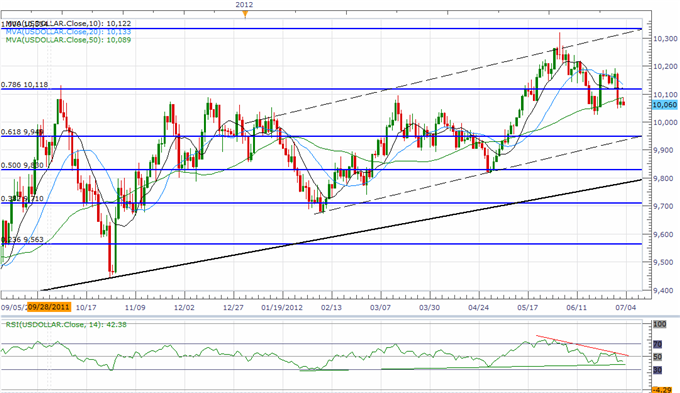 As the USDOLLAR struggles to push back above the 50-Day SMA at 10,089, we may see the greenback told a tight range throughout the holiday session, but the RSI may threaten the downward trend carried over from the end of June as it appears to be putting in a higher low. We anticipate to see further advances in the index as it maintains the upward trending channel from earlier this year, but we saw International Monetary Fund Managing Director Christine Lagarde talk up speculation for additional monetary support amid the downside risks surrounding the world’s largest economy. Indeed, market participants are still calling for another round of quantitative easing in order to combat the slowing recovery, but it seems as though the FOMC will refrain from expanding its balance sheet further as they extend ‘Operation Twist.’ In turn, the fundamental outlook for the U.S. continues to supports a bullish outlook for the dollar, and we may see the index work its way back towards the 10,300 level as the Fed moves away from quantitative easing.

The dollar weakened against three of its four components, led by a 0.39 percent rally in the Australian dollar, but the fundamental outlook for the high-yielding currency remains bearish as the Reserve Bank of Australia maintains a dovish tone for monetary policy. Although the RBA kept the benchmark interest rate at 3.50 percent in July, the central bank continued to highlight the downside risks surrounding the region, and it seems as though the board is seeing a risk for a ‘hard landing’ in China – Australia’s largest trading partner – as the outlook for global growth deteriorates. As a result, market participants are still looking for 25bp worth of rate cuts over the next 12-months according to Credit Suisse overnight index swaps, and we should see the RBA carry out its easing cycle throughout 2012 as growth and inflation falter.