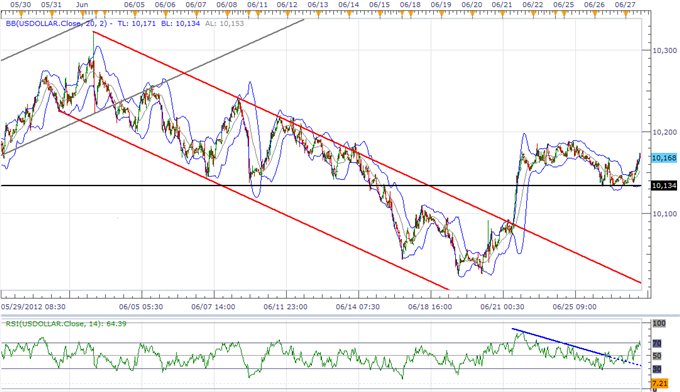 The Dow Jones-FXCM U.S. Dollar Index (Ticker: USDollar) is 0.26 percent higher from the open after moving 56 percent of its average true range, and the short-term outlook certainly casts a bullish outlook for the greenback as the inverse head-and-shoulders formation continues to take shape. As the USDOLLAR holds above the October high (10,134), we should see the index carve out the right shoulder in the coming days, but we will wait for a move above the 10,200 figure to see the reversal pattern pan out as the 30-minute relative strength index approaches overbought territory. However, as the EU Summit takes center stage, we may see market volatility thin over the next 24-hours of trading, and the dollar may face range-bound prices before we see a bullish breakout. 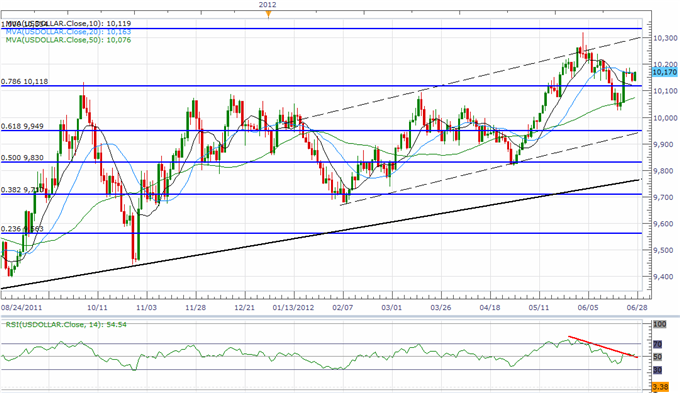 As Germany maintains its strong opposition to Euro bonds, there’s limited scope of seeing a major development this week, and headlines coming out of the meeting may continue to sap risk-taking behavior as the group struggles to meet on common ground. Should the summit fail to calm market jitters, a flight to safety should prop up the dollar, and the index looks poised for another run at 10,300 as it appears to be carving out a higher low in June. At the same time, the slew of positive developments coming out of the world’s largest economy reinforces a positive outlook for the dollar as it limits the Fed’s scope to push through another large-scale asset purchase plan, and we will maintain our bullish call for the USD as the central bank extend ‘Operation Twist’ as oppose to QE3.

Three of the four components weakened against the dollar, led by a 0.41 percent decline in the Japanese Yen, while the Australian dollar is bucking the trend as it advances 0.11 percent against its U.S. counterpart. Nevertheless, market participants are still calling for lower borrowing costs in Australia, with Credit Suisse overnight index swaps reflecting expectations for 100bp worth of rate cuts over the next 12-months, and we should see the high-yielding currency face additional headwinds over the near-term as the RBA preserves a dovish tone for monetary policy. As the AUDUSD fails to push back above the 200-Day SMA at 1.0242, the pair appears to have carved a short-term top in June, and we may see the exchange rate fall back towards the 50.0 percent Fibonacci retracement from the 2010 low to the 2011 high around 0.9570 as interest rate expectations falter.