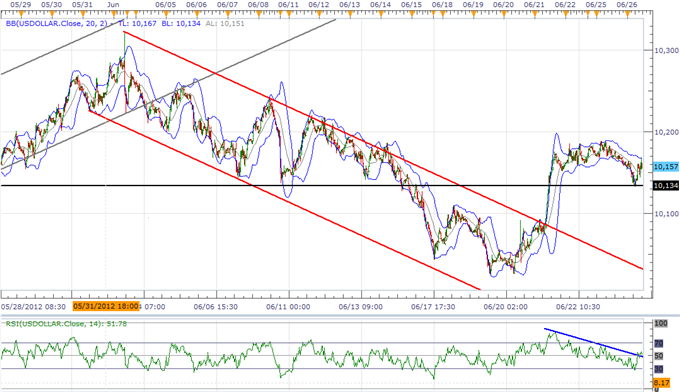 Although the Dow Jones-FXCM U.S. Dollar Index (Ticker: USDollar) is 0.17 percent lower from the open, we’re seeing the index bounce off of former support around 10,134, and the greenback may continue to retrace the decline from earlier this month as it breaks out of the bearish trend. Indeed, an inverse head-and-shoulders appears to be taking shape on the 30-minute chart, but we will need a move above the 10,200 figure for the reversal pattern to pan out. As the EU Summit in Brussels takes center stage, the headlines coming out of the euro-area is likely to drive market volatility over the remainder of the week, but the meeting may do little to restore investor confidence as the group struggles to meet on common ground. 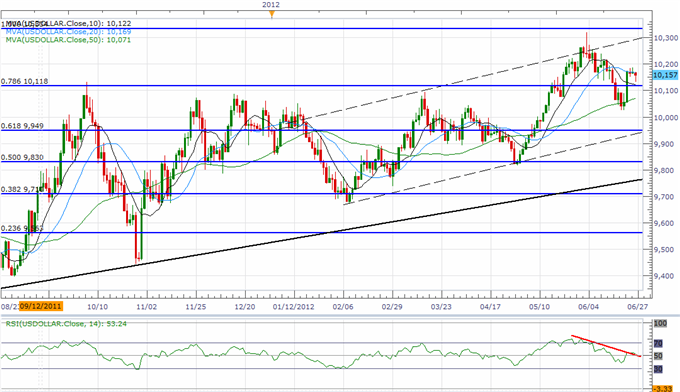 Although the EU is making a greater push for fiscal integration, German policy makers continued to strike down the idea of sharing all liabilities across the region, and we may see a growing rift within the group as the governments operating the fixed-exchange rate system continue to move in their own interest. As a result, dismal developments coming out of Brussels may spark another flight to safety, and we may see the USDOLLAR make another run at the 10,300 as it carves out a higher low in June. As the relative strength index breaks out of the downward trend carried over from May, we should see the ascending channel from earlier this year continue to take shape, and we may see the greenback mark fresh 2012 highs in the coming days as it benefits from safe-haven flows.

Three of the four components rallied against the greenback, led by a 0.25 percent advance in the Japanese Yen, and the low-yielding currency may continue to appreciate against its U.S. counterpart as the government increases its effort to balance its public finances. Indeed, Japanese Prime Minister Yoshihiko Noda is pushing for a sales-tax increase for the first time in 15-years, and the move certainly increases the appeal of the Yen as the debt crisis continues to drag on investor confidence. However, the ongoing strength in the local currency may put increased pressure on the Bank of Japan to intervene in the foreign exchange market, and we should see the central bank continue to embark on its easing cycle as policy makers aim to encourage an export-led recovery. As the USDJPY breaks out of the downward trending channel from March, we should see the rebound from 77.65 gather pace, and the pair appears to be carving out a bullish trend amid the series of higher highs paired with higher lows.