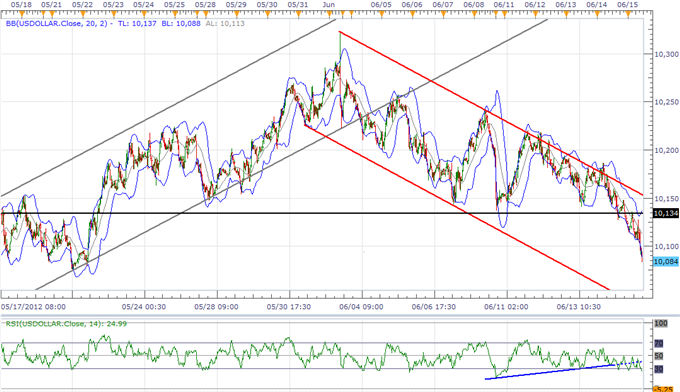 USD Searches For Support Ahead Of FOMC, JPY Benefits From BoJ Policy

The Dow Jones-FXCM U.S. Dollar Index (Ticker: USDollar) is 0.47 percent lower on the day after moving 110 percent of its average true range, and the pullback from 10,323 may gather pace in the coming days as the downward trending channel continues to take shape. Although, the decline in the 30-minute relative strength index has negated the bullish divergence, the oscillator certainly foreshadows a short-term bounce for the greenback as it flirts with oversold territory. In turn, we may see the October high (10,134) act as interim resistance, but we may see the FOMC interest rate decision on tap for next week prop up the reserve currency should the central bank continue to soften its dovish tone for monetary policy. 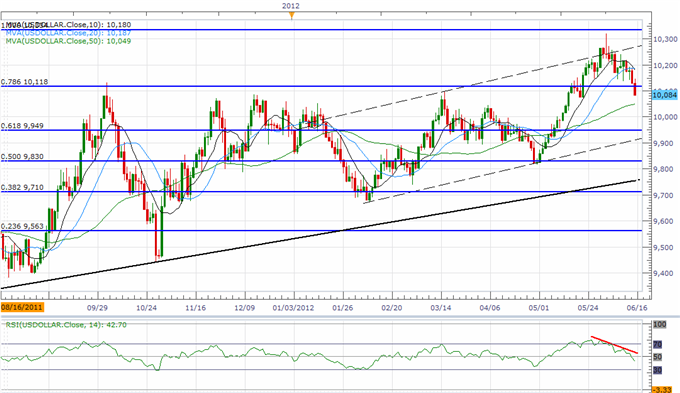 As the USDOLLAR struggles to hold above the 78.6 percent Fibonacci retracement around 10,118, we should see the greenback continue to consolidate within the ascending channel, and it’s imperative that the index holds above the 61.8 percent Fib around 9,949 to maintain a bullish outlook for the reserve currency. As the greenback maintains the upward trend from earlier this year, we’re still looking for a higher low in the index, but we may see the FOMC spark a rally in the dollar should the central bank strike a more balanced tone for the world’s largest economy. In light of the recent remarks by Fed Chairman Bernanke, it seems as though the committee is moving away from its easing cycle, and the central bank may highlight an increased risk for inflation amid the stickiness in underlying price growth. Although the short-term correction in the dollar gathers pace, the shift in the Fed’s policy outlook continues to favor a bullish bias, and we should see the greenback appreciate further this year as bets for QE3 dissipate.

Once again, the greenback weakened against all four components, led by a 0.86 percent rally in the Japanese Yen, and the low-yielding currency may continue to appreciate against its U.S. counterpart as the Bank of Japan remains on the sidelines. After maintaining their current policy in June, BoJ Governor Masaaki Shirakawa maintained his pledge to pursue ‘powerful’ monetary easing, and floated the idea of utilizing SWAP lines as the debt crisis continues to pose a threat to the world financial system. However, as the ongoing strength in the local currency dampens the outlook for growth, the central bank is likely to come under increased pressure to intervene in the foreign exchange market, and speculation for a ‘Yentervention’ may resurface in the coming days as Finance Minister Jun Azumi stands ready to act against the low-yielding currency.