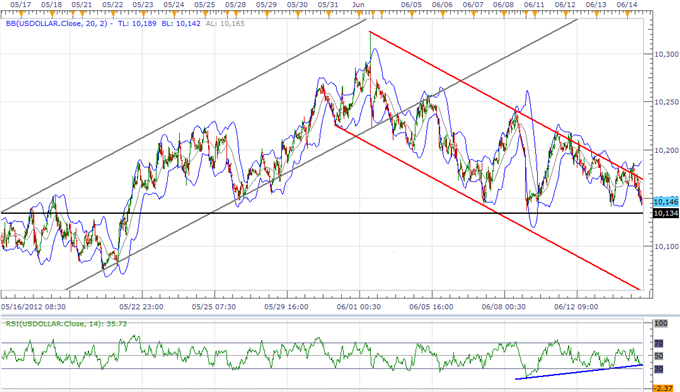 Although the Dow Jones-FXCM U.S. Dollar Index (Ticker: USDollar) remains 0.35 percent lower on the day, the greenback may continue to threaten the downward trending channel from earlier this month as it remains supported by the October high (10,134). As the bullish divergence in the 30-minute relative strength index takes shape, the index looks poised for a breakout, and it seems as though the greenback is building a short-term base ahead of the FOMC interest rate decision on tap for June 20 as the central bank moves away from its easing cycle. In turn, we may see the dollar make another run at the 10,300 in the days ahead, but market volatility may thing going into the end of the week as the Greek elections take center stage. 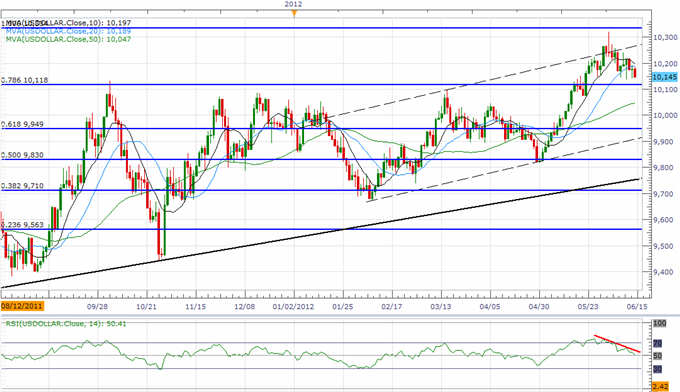 As the USDOLLAR appears to be carving out a higher low this week, we may see fresh 2012 highs in the coming days, but the relative strength index on the daily chart casts a bearish outlook for the greenback as it maintains the downward trend from the beginning of the month. In turn, we may see the index continue to retrace the sharp rally from May, and the dollar may ultimately fallback towards the 61.8 percent Fibonacci retracement around 9,949 should Fed Chairman Ben Bernanke strike a rather dovish tone for monetary policy. As the central bank head is scheduled to hold a press conference following the rate announcement, the fresh batch of central bank rhetoric is likely to heavily influence the USD, and Mr. Bernanke may keep all options on the table as the sovereign debt crisis continues to pose a threat to the global financial system. However, as the stickiness in underlying price growth raises the risk for inflation, we expect the chairman to strike a more balanced tone for the world’s largest economy, and we will maintain our bullish forecast for the dollar as the FOMC faces limited scope to ease policy further.

All four components advanced against the greenback, led by a 0.58 percent rise in the Australian dollar, but we should see a short-term pull back in the AUDUSD as it continues to find interim resistance around parity. Indeed, the high-yielding currency has benefitted from the rebound in market sentiment, but we may see currency traders scale back their appetite for risk amid the slew of major event risk on tap for the days ahead. Nevertheless, we remain bearish against the Australian dollar as market participants see the Reserve Bank of Australia carrying out its easing cycle throughout 2012, and the AUDUSD is likely to face additional headwinds over the near-term as the fundamental outlook for the region remains weak. According to Credit Suisse overnight index swaps, market participants are still looking for 100bp worth of rate cuts over the next 12-months, and the downturn in interest rate expectations should continue to dampen the appeal of the aussie as the RBA maintains a dovish tone for monetary policy.