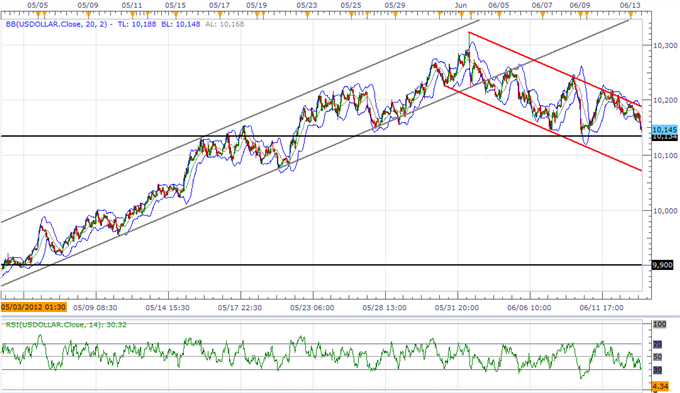 The Dow Jones-FXCM U.S. Dollar Index (Ticker: USDollar) is 0.10 percent lower from the open after moving 89 percent of its average true range, and the rebound in market sentiment may continue to dampen the appeal of the greenback as currency traders increase their appetite for risk. However, as the 30-minute relative strength index holds above oversold territory, we may see the October high (10,134) continue to provide interim support, and the index may track sideways over the remainder of the week as the Greek elections come into focus. In turn, we may see the dollar threaten the downward trending channel from earlier this year, and the ongoing turmoil in Europe should continue to prop up the reserve currency as it benefits from safe-haven flows. 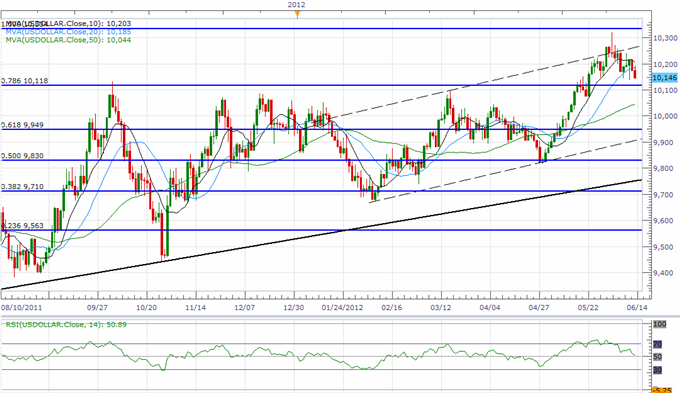 However, as long as former resistance (10,118) hold up as support, we should continue to see a muted correction in the greenback, and the medium-term outlook for the USDOLLAR remains bullish as the upward trending channel from earlier this year takes shape. Indeed, we are looking for a higher low to pave the way for fresh 2012 highs, and the shift in the policy outlook should prop up the reserve currency throughout the second-half of the year as the Federal Reserve continues to soften its dovish tone for monetary policy. As the FOMC becomes increasingly upbeat towards the economy, it seems as though the central bank will continue to embark on its wait-and-see approach, and Fed Chairman Ben Bernanke may strike a balanced outlook for the region as the recovery gets on a more sustainable path.

Three of the four components rallied against the greenback, led by a 0.82 percent advance in the euro, but the relief rally in the single currency is likely to be short-lived as European policy makers continue to make an effort to buy more time. Although the EU makes a greater push for increased integration, the reactionary approach taken by the group has failed to restore investor confidence, and we may see a growing rift within the union as the governments operating under the fixed-exchange rate system struggle to get their house in order. As the EURUSD struggles to hold above the 23.6 percent Fib from the 2009 high to the 2010 low around 1.2640-50, the pair certainly appears to be carving out a lower high in June, and the single currency is likely to face additional headwinds later this year as the region remains at risk for a prolonged recession.