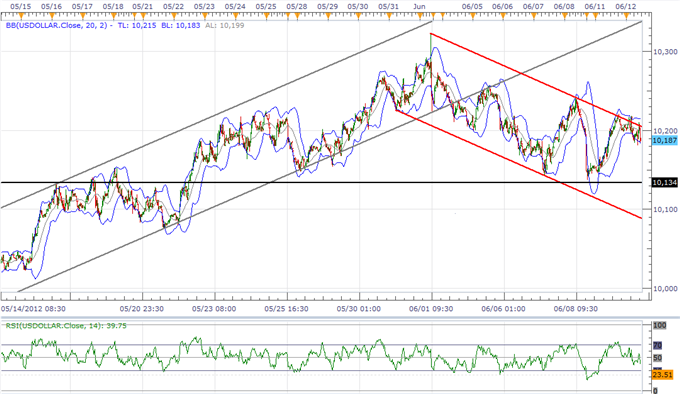 USD To Hold Range Ahead Of Greek Elections, AUD Remains At Risk

The Dow Jones-FXCM U.S. Dollar Index (Ticker: USDollar) is 0.26 percent lower from the open after moving 63 percent of its average true range, and we may see the greenback make another run at the October high (10,134) as the downward trending channel from earlier this month continues to take shape. As the EU tries to address the uncertainties surrounding Spain’s bailout package, the increased effort to stem the risk for contagion may continue to prop up market sentiment, but heightening finance costs across the European periphery may spark another flight to safety as Cyprus stands next in line to seek assistance. In turn, the pickup in risk-taking behavior may be short-lived, and we may see the dollar threaten the bearish trend ahead of the Greek elections amid the ongoing threat of a euro-area breakup. 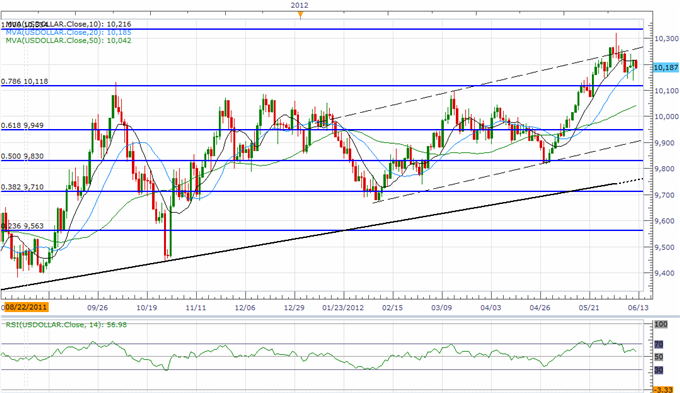 As the USDOLLAR continues to hold above the 78.6 percent Fibonacci retracement around 10,118, it seems as though the greenback will face range-bounce prices over the near-term, but we may see the reserve currency regain its footing ahead of the FOMC interest rate decision on tap for June 20 as the central bank continues to soften its dovish tone for monetary policy. Atlanta Fed President Dennis Lockhart, who’s also a voting member this year, talked down speculation for additional monetary support as the economy gets on a more sustainable path, but went onto say that ‘any of the options should be taken off the table under the current circumstances’ as the sovereign debt crisis continues to pose a threat to the world financial system. Indeed, it’s become increasingly apparent that the FOMC will embark on more easing only if the economy slips back into recession, and we should see the committee preserve its wait-and-see approach throughout 2012 as the recovery gradually gathers pace. In turn, we will maintain our bullish call for the USD, and it seems as though the dollar will continue to track sideways before making another run at the 10,300 figure.

The greenback weakened against two of the four components, led by a 0.65 percent rally in the Australian dollar, and the high-yielding currency may continue to outperform against its major counterparts as it benefits from the rise in risk-taking behavior. As the recent developments coming out of Europe props up market sentiment, we may see the AUDUSD make another run at party, but the lack of momentum to push back above the 38.2 percent Fib from the 2010 low to the 2011 high around 0.9930-50 may keep the pair within a narrow range over the next 24-hours of trading. Nevertheless, market participants are still calling for another 100bp worth of rate cuts from the Reserve Bank of Australia over the next 12-months according to Credit Suisse overnight index swaps, and the interest rate outlook continues to foster a bearish forecast for the AUDUSD as the central bank looks to carry out its easing cycle throughout 2012. In turn, we are looking to sell rallies in the aussie-dollar, and we will be keeping a close eye on the relative strength index as it maintains the downward trend from earlier this year.