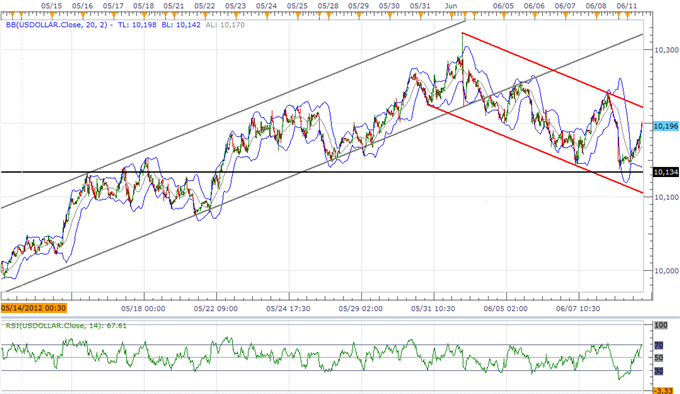 Although the Dow Jones-FXCM U.S. Dollar Index (Ticker: USDollar) remains 0.02 percent lower from the open, the shift away from risk-taking behavior should continue to prop up the greenback, and the dollar may track higher in the coming days as it appears to be finding interim support around the October high (10,134). However, as the 30-minute relative strength index approaches overbought territory, the greenback may consolidate going into the Asian session, and we will keep a close eye on the 10,134 figure as the index maintains the downward trending channel from the beginning of the month. In turn, we may see the index continue to carve out a series of lower highs paired with lower lows, and the dollar may continue to come off of the yearly high (10,323) as European policy makers increase their effort to dampen the threat for contagion. 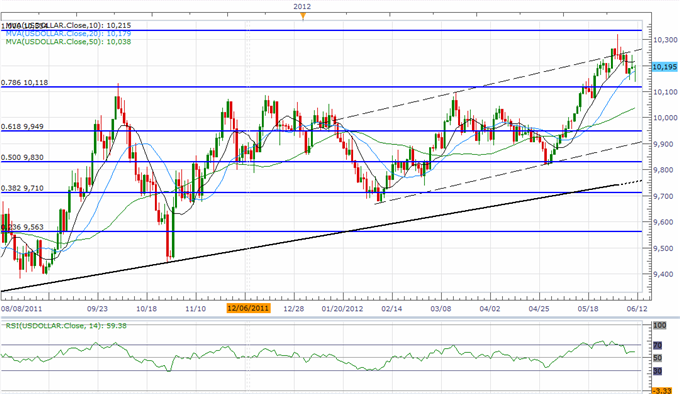 Although the economic docket remains fairly light for the remainder of the day, the fresh batch of central bank rhetoric from FOMC voting members Dennis Lockhart, John Williams, and Sandra Pianalto may increase their appeal of the reserve currency as the board continues to soften its dovish tone for monetary policy. As the Fed sees the world’s largest economy on a more sustainable path, we should see the committee move away from its easing cycle, and the shift in the policy outlook continues to instill a bullish outlook for the USD as market participants scale back bets for another large-scale asset purchase program. In turn, we may see the index continue to hold above the 78.6 percent Fibonacci retracement around 10,118, and the dollar may trackside ways before making another run at the 10,300 figure.

Two of the four components weakened against the greenback, led by a 0.15 percent in the Euro, while the Japanese Yen consolidated within Friday’s range as the USDJPY breaks out of the downward trending channel carried over from March. In turn, the dollar-yen looks poised to retrace the reversal from the 84.00 figure, but it seems as though the pair may hold steady ahead of the Bank of Japan interest rate decision on tap for later this week as the central bank continues to embark on its easing cycle. As the BoJ pledges to act against its local currency, additional measures to dampen the appeal of the Yen could spark a sharp rally in the exchange rate, but the pair may make another run at the 78.00 level should the central bank preserve its current policy in June.