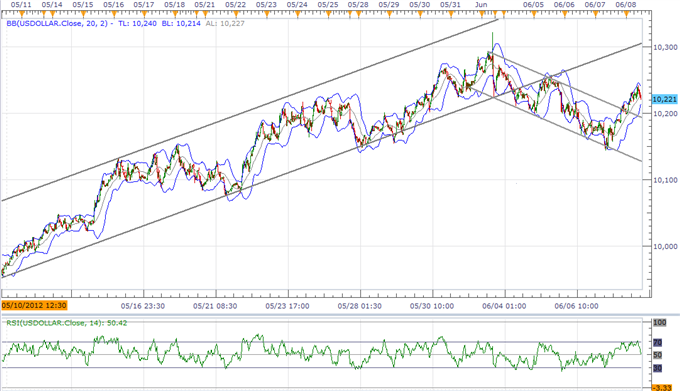 The Dow Jones-FXCM U.S. Dollar Index (Ticker: USDollar) remains 0.28 percent higher from the open after moving 77 percent of its average true range, and the pullback in the greenback was certainly short-lived as price action breaks out of the downward trending channel from earlier this week. In turn, we may see the index make another run at the 10,300 figure, but the dollar may consolidate throughout the North American trade as the 30-minute relative strength index falls back from overbought territory. In turn, we may see the dollar find trendline support along the upper bounds of the channel, and the bullish sentiment surrounding the reserve currency may gather pace in the week ahead as Fed Chairman Ben Bernanke talks down speculation for another round of quantitative easing. 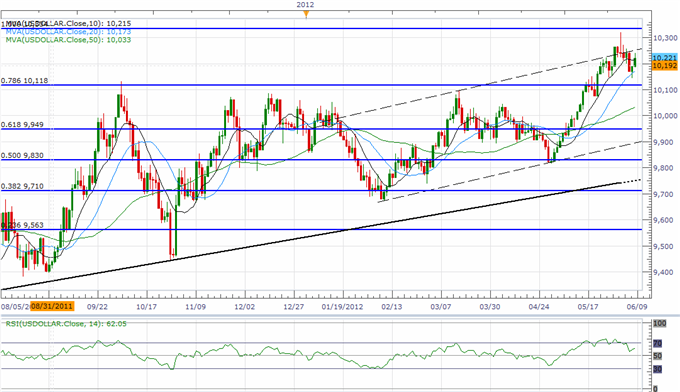 Indeed, the less-dovish tone struck by Mr. Bernanke has helped to shore up the dollar, and it seems as though the Fed will stick to its current policy throughout 2012 as the recovery gradually gathers pace. As the majority of the FOMC sees the economy on a more sustainable path, we should see the committee move away its easing cycle, and the central bank may sound more hawkish in the second-half of the year as the stickiness in price growth raises the risk for inflation. In turn, we should see the USDOLLAR maintain the ascending triangle from earlier this year, and it seems as though there’s a fairly muted correction in the index as growing speculation for a Spanish bailout increases the appeal of the reserve currency. As a result, we may see the dollar track sideways in the week ahead, and we will maintain our bullish outlook for the greenback as the Fed continues to curb expectations for additional monetary support.

The greenback advanced against three of the four components, led by a 0.60 percent decline in the British Pound, but we may see the GBPUSD track sideways in the days ahead as it continues to trade between former support (1.5600) and the 50.0 percent Fibonacci retracement from the 2009 low to high around 1.5270. As market participants look forward to the Bank of England Minutes due out on June 20, the pound-dollar may face range-bounce prices over the near-term, and we will be closely watching the vote count as the central bank keeps the door open to expand monetary policy further. Although there’s speculation that the BoE will expand its asset purchase facility beyond the GBP 325B target, sticky prices paired with the rise in inflation expectations certainly limits the board’s scope to conduct more QE, and we may see the British Pound regain its footing later this month should we continue to see a 8-1 split within the Monetary Policy Committee.