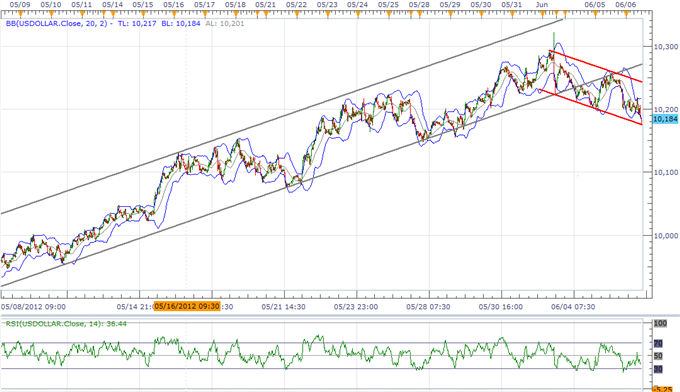 The Dow Jones-FXCM U.S. Dollar Index (Ticker: USDollar) is 0.59 percent lower on the day after moving 124 percent of its average true range, and the greenback may track lower over the remainder of the week as it carves out a short-term top coming into June. As we expect former trendline support to act as new resistance, the index appears to be carving out a downward trend, and the recent weakness in the dollar may gather pace over the coming days as the European Central Bank looks to increase its effort in addressing the debt crisis. At the same time, the Fed’s Beige Book may boost risk-taking behavior should the survey fuel speculation for another round of quantitative easing, but we may see the report prop up the dollar should the central bank continue to take note of the more robust recovery. 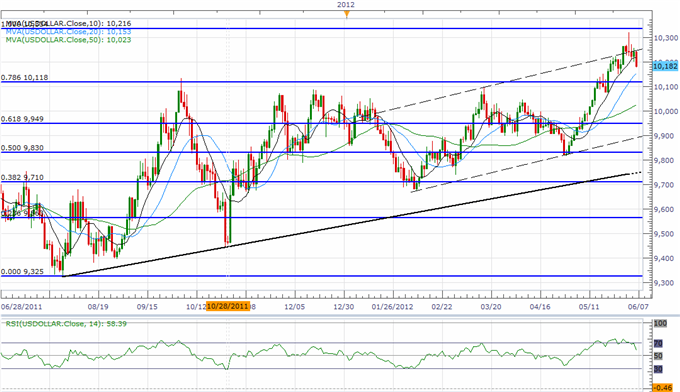 Indeed, Atlanta Fed President Dennis Lockhart floated the idea of extending ‘Operation Twist’ as opposed to expanding the balance sheet further, and it seems as though the central bank is looking at other options besides QE3 as the debt crisis continues to pose a risk to the global financial system. Beyond the external risks surrounding the world’s largest economy, the ongoing improvement in private sector activity continues to limit the Fed’s scope to further pump liquidity into the system, and we should see the FOMC continue to soften its dovish tone for monetary policy as the world’s largest economy gets on a more sustainable path. Nevertheless, it seems as though we’re finally seeing a correction in the USDOLLAR as the relative strength index continues to come off of overbought territory, and will be watching the 61.8 percent Fibonacci retracement around 9,949 for key support as it maintains the upward trending channel from earlier this year.

Three of the four components advanced against the dollar, led by a 1.69 percent rally in the Australian dollar, and the high-yielding currency may continue to retrace the selloff from the previous month as currency traders increase their appetite for risk. Indeed, the above-forecast 1Q GDP print has helped to prop up the AUDUSD, but the rebound in the exchange rate is likely to be short-lived as market participants see the Reserve Bank of Australia taking additional steps to stimulate a stronger recovery. According to Credit Suisse overnight index swaps, investors are still looking for another 100bp worth of rate cuts over the next 12-months, and we will main a bearish outlook for the aussie-dollar as the continues to carry out its easing cycle.