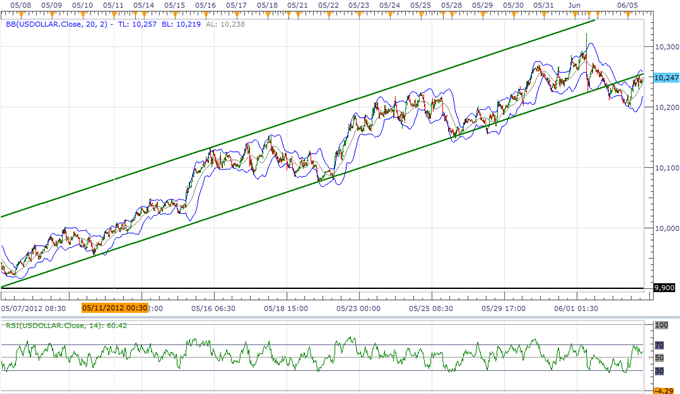 USD Correction On the Horizon, JPY Struggles On G7 Commitment

The Dow Jones-FXCM U.S. Dollar Index (Ticker: USDollar) is 0.15 higher from the open after moving 95 percent of its average true range, and the headline-driven market may continue to prop up the greenback as it benefits from safe-haven flows. However, as the index struggles to push back into the upward trending channel from the previous month, it seems as though former trendline support may come in as new resistance, and it seems as though the dollar carving out a short-term top in June as the 30-minute relative strength index continues to retreat ahead of 70. In turn, we may see the small pullback in the index turn into a larger correction, but we will maintain our bullish outlook for the dollar as the world’s largest economy gets on a more sustainable path. 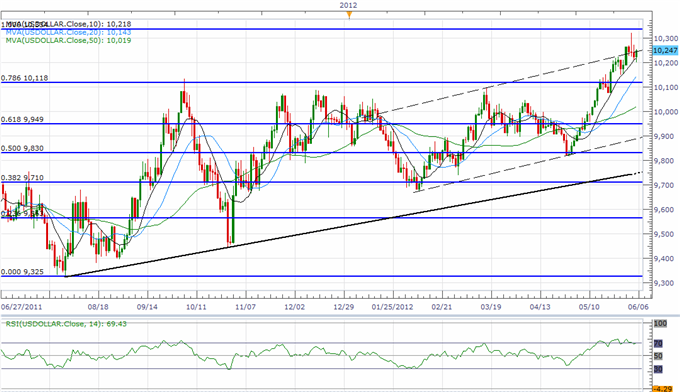 Although the USDOLLAR looks poised for a correction, we are still waiting for a close below the 10-Day SMA (10,217) to see a larger move to the downside, but we will be looking for a higher low in the index as it maintains the broad ascending channel from earlier this year. In turn, we may see the dollar revert back towards the 61.8 percent Fibonacci retracement around the 9,949, but a move below the 9,900 figure would negate our bullish outlook as it exposes the 50.0 percent Fib (9,830). Nevertheless, central bank hawk Richard Fisher talked down speculation for another large-scale asset purchase program, saying that another round of quantitative easing would have a limited impact in further stimulating the economy, and we should see the FOMC move away from its easing cycle as outlook for growth and inflation picks up. In turn, we favor going long the USD once the correction pans out, and the dollar may appreciate further in the second-half of the year as Fed officials soften their dovish tone for monetary policy.

Three of the four components weakened against the greenback, led by a 0.43 percent decline in the Euro, while the Japanese Yen shed 0.28 percent. Indeed, the low-yielding currency came under pressure after Japanese Finance Minister Jun Azumi said the Group of Seven will cooperate to tackle extreme moves in the foreign exchange market, and went onto say that the government is concerned about the recent appreciation in the local currency as it dampens the prospects for an export-led recovery. As the Bank of Japan adopts a wait-and-see approach, it seems as though government officials are making an attempt to talk down the yen, but positive real interest rates in Japan continues to increase the appeal of the Yen as market sentiment remains frail.