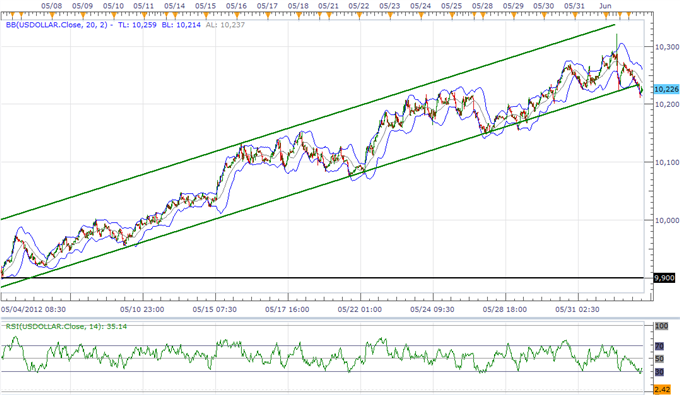 The Dow Jones-FXCM U.S. Dollar Index (Ticker: USDollar) is 0.11 percent lower from the open after moving 110 percent of its average true range, and it looks as though the greenback has carved a short-term top coming in June as it threatens the upward trending channel carried over from the previous month. Although currency traders are look for a short-term correction in the greenback, the recent selloff in the USD may turn out to be a false break, and we will keep a close eye on the 30-minute relative strength index as it bounces back from oversold territory. As the oscillator continues to find support around 27, we may see the dollar consolidate ahead of the Fed’s Beige Book on tap for later this week, but the central bank may continue to strike a cautious tone for the world’s largest economy amid the ongoing slack in private sector activity. 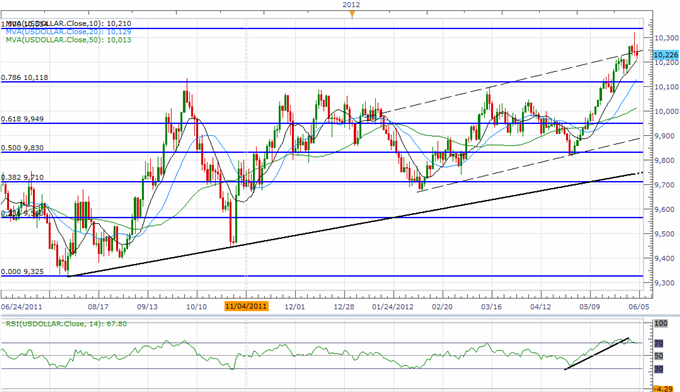 As the USDOLLAR continues to bounce off of the 10-Day SMA (10,210), the RSI on the daily chart may hold in overbought territory, and we may see the greenback work its way back towards the 10,300 figure as the ongoing threat for contagion drags on market sentiment. Although European policy makers are looking to recapitalize the banking system through the European Stability Mechanism, it seems as though the recent movement is merely another attempt to buy more time as Germany continues to oppose broadening the scope of the permanent bailout fund. As there appears to be a growing rift within the EU, there’s speculation that the European Central Bank may offer some relief at the rate decision scheduled for Wednesday, but we may see the Governing Council move away from its nonstandard measures as they have a limited impact in addressing the risks surrounding the real economy. In turn, ECB President Mario Draghi may look to target the benchmark interest rate, and the dollar may continue to benefit from the ongoing turmoil in the euro-area as investor confidence remains frail.

Three of the four components advanced against the greenback, led by a 0.47 percent rally in the Euro, while the Australian dollar added 0.15 percent ahead of the Reserve Bank of Australia interest rate decision on tap for Tuesday. According to a Bloomberg News survey, 16 of the 27 economists polled are looking for a rate cut, while market participants are pricing a 63 percent chance for a 50bp rate cut according to Credit Suisse overnight index swaps. In light of the dovish rhetoric from the RBA, we may see the central bank continue to take an aggressive approach in addressing the risks surrounding the $1T economy, and the board may carry its easing cycle into the second-half of the year as the slowdown in China – Australia’s largest trading partner – threatens to derail the recovery. In turn, the AUDUSD may face another selloff going into the middle of the week, and the high-yielding currency may continue to give back the rebound from October as the flight to safety gathers pace.