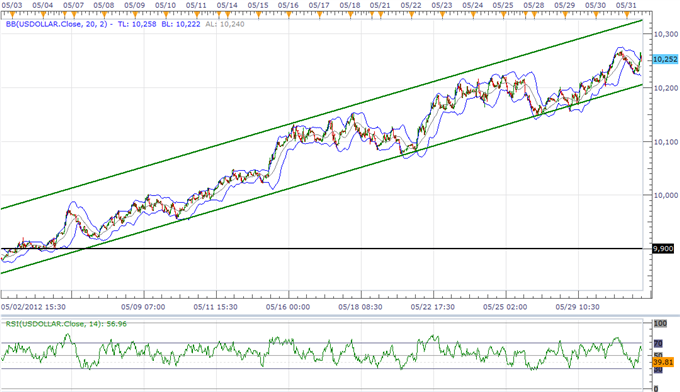 Although the Dow Jones-FXCM U.S. Dollar Index (Ticker: USDollar) remains 0.11 percent lower from the open, the series of higher lows in the index continues to cast a bullish outlook for the greenback, and we may see a fresh yearly high going into the end of the week as the 30-minute relative strength index snaps back from a low of 31. In turn, we may see the dollar make a run at the 10,300 figure, but we may see the reserve currency consolidate ahead of the highly anticipated Non-Farm Payrolls report as the weaker-than-expected ADP employment figures dampen expectations for a marked rise in job growth. Nevertheless, we will maintain our bullish call for the USD as the Federal Reserve continues to soften its dovish tone for monetary policy, and we may see the central bank shift gears later this year as the stickiness in underlying inflation raises the outlook for inflation. 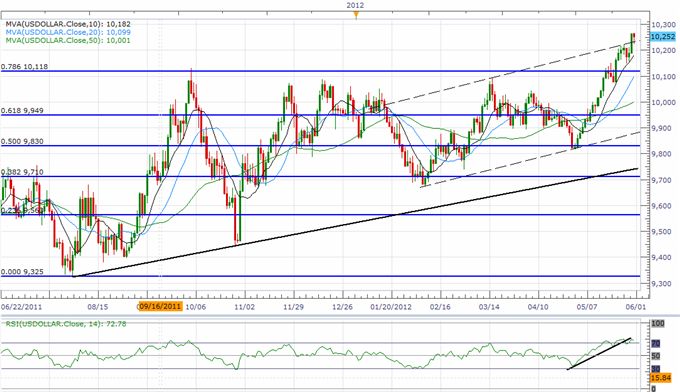 Cleveland Fed President Sandra Pianalto, who also serves on the FOMC this year, talked down speculation for additional monetary support, stating that the committee needs to focus on the ‘longer term,’ and Ms. Pianalto appears to be shifting her outlook for monetary policy as she expects inflation to stay close to the 2% target. As Fed officials see the world’s largest economy on a more sustainable path, Fed Chairman Ben Bernanke certainly faces increased hurdles to push through another large-scale asset purchase program, and we may see the FOMC start to discuss a tentative exit strategy as the outlook for growth and inflation picks up. Although the USDOLLAR remains overbought, we are still waiting for the relative strength index to push back below 70 to see a short-term correction, but the upward trending channel from earlier this year should continue to take shape as the Fed moves away from its easing cycle.

Two of the four components weakened against the dollar, led by a 0.53 percent decline in the British Pound, and the GBPUSD may continue to track lower in June as the relative strength index pushes deeper into oversold territory. As the pound-dollar struggles to find support, we may see the exchange rate come up against the 50.0 percent Fibonacci retracement from the 2009 low to high around the 1.5270 figure, but the ongoing turmoil in the euro-area may continue to dampen the appeal of the sterling as the Bank of England keeps the door open to expand monetary policy further. In turn, we may see the British Pound face additional headwinds ahead of the next BoE rate decision on June 7, and we may see a growing rift within the Monetary Policy Committee as central bank officials anticipate to see a faster recovery in the second-half of 2012.