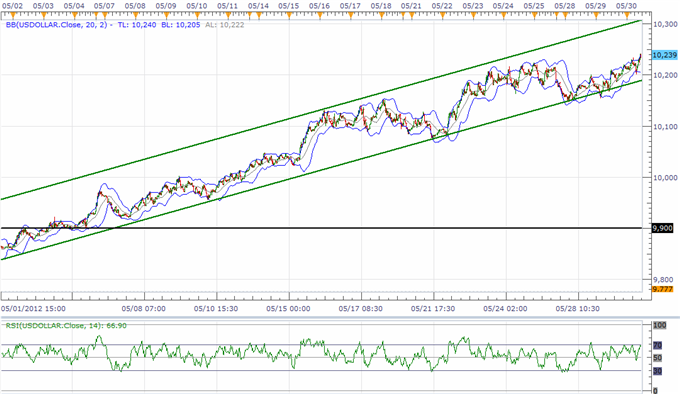 The Dow Jones-FXCM U.S. Dollar Index (Ticker: USDollar) is 0.47 percent higher from the open after moving 102 percent of its average true range, and the headline-driven market may continue to spark increased demands for the greenback as currency traders scale back their appetite for risk. As the upward trending channel continues to take shape, we may see the index make a run at the 10,300 figure in the days ahead, but we may see a small pullback going into the end of the week as the 30-minute relative strength index approaches overbought territory. In turn, we may see the dollar revert back towards the 10,200 figure, and we may see the reserve currency consolidate ahead of Friday’s U.S. Non-Farm Payrolls report as market participants weigh the outlook for monetary policy. 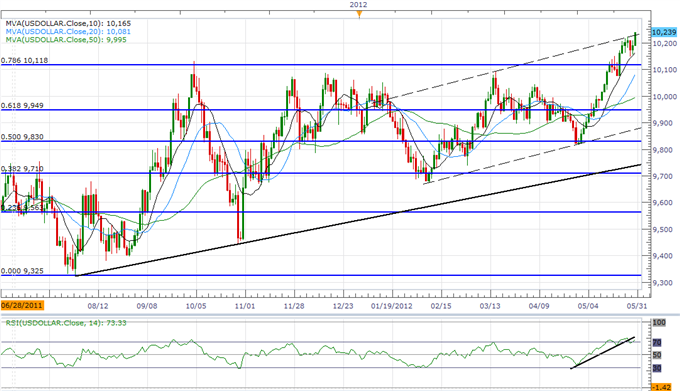 Indeed, the relative strength index on the daily chart pushed back above 70 as the USDOLLAR extended the advance from earlier this month, and we may see the currency traders increase bets for a short-term correction in the greenback as it threatens the upper bounds of the upward trending channel carried over from February. However, as the index remains supported by the 10-Day SMA at 10,165, we would need a move below the moving average to see a meaningful break to the downside, but a fresh batch of central bank rhetoric may prop up the greenback over the next 24-hours of trading should New York Fed President William Dudley, who also serves as a permanent member on the FOMC, continue to talk down speculation for another large-scale asset purchase program. As the economy gets on a more sustainable path, Mr. Dudley has certainly scaled back his dovish tone for monetary policy, and Fed officials may sound a bit more hawkish going into the second-half of the year as the stickiness in underlying price growth raises the risk for inflation.

Three of the four components weakened against the greenback, led by a 1.15 percent decline in the Australian dollar, while the Japanese Yen advanced another 0.71 as positive real interest rates in Japan increases the appeal of the low-yielding currency. We’ve see the downward trend in the USDJPY gather pace as Bank of Japan board member Hirohide Yamaguchi talked down speculation for new easing, and the dollar-yen may continue to give back the advance from earlier this year as it struggles to find support around the 79.00 figure. In turn, we may see the USDJPY make a run at the 200-Day SMA (78.59), but the pair may ultimately fall back towards former resistance around 78.25 as it searches for a floor.