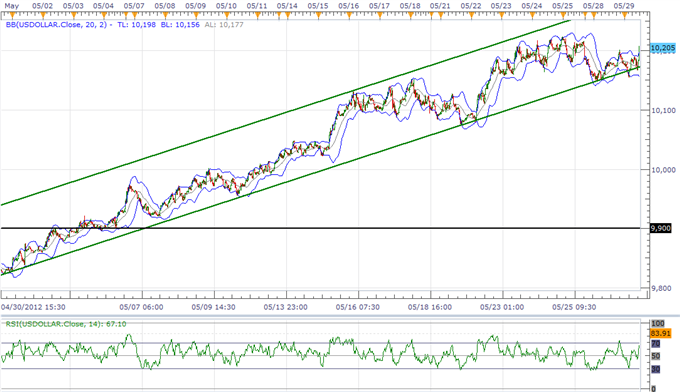 Although the Dow Jones-FXCM U.S. Dollar Index (Ticker: USDollar) remains 0.28 higher from the open, the greenback continues to threaten the upward trend from the beginning of the month, and the dollar may mark a fresh high before turning lower as the flight to safety gathers pace. As the ongoing turmoil in Europe continues to drag on investor confidence, the headline-driven market may continue to prop up the greenback, and we may see a fairly muted pullback in the USD as it benefits from safe-haven flows. In turn, the dollar may hold steady ahead of the highly anticipated Non-Farm Payrolls report, and a positive development may spark a fresh high in the index as the Federal Reserve continues to soften its dovish tone for monetary policy. 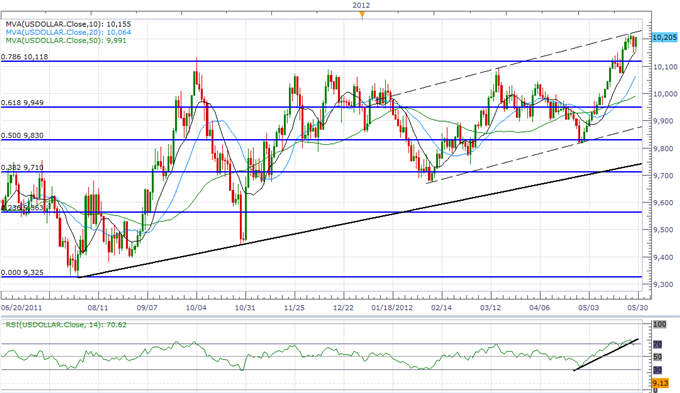 The daily chart continues to foreshadow a short-term correction for the USDOLLAR as the relative strength index continues to come off of overbought territory, and we are waiting to see the 10-Day SMA (10,154) give way to see a reversal take shape. However, it seems as though the FOMC is moving away from its easing cycle as the world’s largest economy gets on a more sustainable path, and the shift in the policy outlook instills a bullish forecast for the greenback as there appears be a growing rift within the committee. In light of the dissenting views amongst Fed officials, there’s certainly limited scope of seeing another large-scale asset purchase program, and we may see the central bank start to discuss a tentative exit strategy amid the stickiness in underlying inflation. According to Credit Suisse overnight index swaps, investors are gradually pricing a rate hike for the next 12-months, and the rise in interest rate expectations may carry the dollar higher in the second-half of the year as the recovery gradually gather pace.

The greenback advanced against three of the four components, led by a 0.50 percent decline in the Euro, and the single currency may face additional headwinds in the days ahead as it struggles to find support. As the EURUSD slips to a fresh yearly low of 1.2469, it seems as though currency traders are becoming increasingly bearish against the single currency as the European Central Bank refrains from tackling the ongoing turmoil in the financial system, but it may only be a matter of time before the Governing Council rolls out with more stimulus as the region faces an growing risk for a prolonged recession. As the ECB moves away from its non-standard measures, market participants are increasing bets for a rate cut, and the central bank may push the benchmark interest rate to fresh record-lows as the governments operating under the single currency struggle to restore investor confidence.