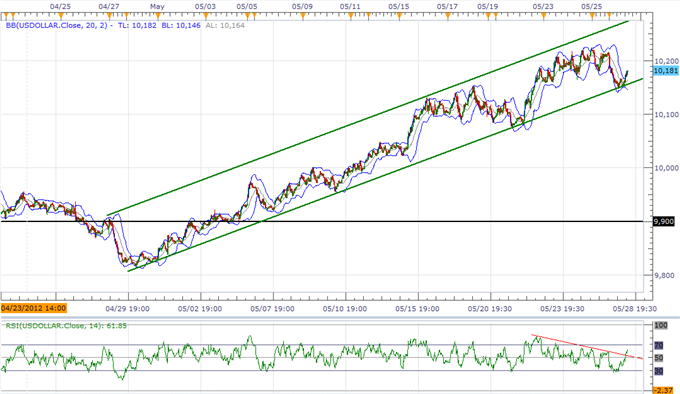 The Dow Jones-FXCM U.S. Dollar Index (Ticker: USDollar) is 0.33 percent lower from the open after moving 71 percent of its average true range, but we may see the dollar carve out a fresh high going into June as the upward trending channel from earlier this month continues to take shape. Indeed, the topside break in the 30-minute relative strength index dampens the likelihood of seeing a short-term correction in the index, and the bullish sentiment underlining the reserve currency may gather pace as it continues to benefit from safe-haven flows. However, we may see the greenback consolidate over the coming days as market participants look forward to the U.S. Non-Farm Payrolls report due out on Friday, and the report may ultimately trigger a short-term correction in the greenback should it foster speculation for additional monetary support. 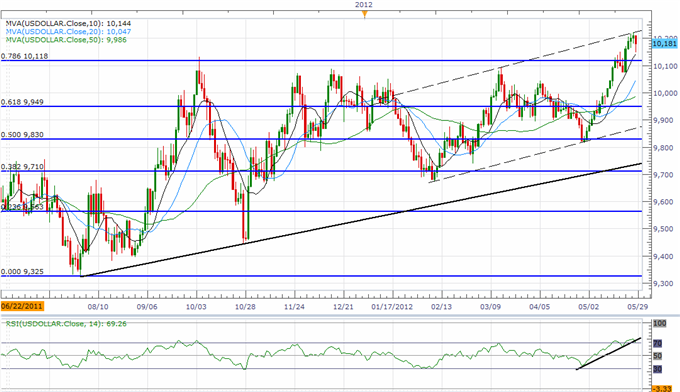 As the USDOLLAR comes off of the upper bounds of the ascending range, the daily chart continues to foreshadow a short-term correction, and we will keep a close eye on the relative strength index as it fails to maintain the upward trend from the beginning of the month. As the oscillator comes back from overbought territory, a move below 70 could pave the way a larger move to the downside, but we will look for a higher low in the index as it maintains the upward trending channel from earlier this year. In turn, we may see the dollar revert back to the 61.8 percent Fibonacci retracement around 9,949, but it’s imperative that the greenback holds above the 9,900 figure to maintain a bullish outlook for the USD. In turn, we will be looking to buy dips as we head into June, and the upward trend in the reserve currency may continue to gather pace in the second-half of the year as the Federal Reserve moves away from its easing cycle.

The greenback weakened across the board on Monday, led by a 0.85 percent advance in the Australian dollar, while the Japanese Yen climbed 0.29 as the Bank of Japan talked down speculation for additional asset purchases. Indeed, the policy meeting minutes reiterated that the BoJ is not monetize government debt as market participants look for more easing, and it seems as though the central bank will carry its current policy into the second-half of the year even as Governor Masaaki Shirakawa pledges to pursue ‘powerful’ monetary easing. As the USDJPY threatens the downward trend carried over from March, we are looking for a close above the 20-Day SMA (79.75) to see a meaningful rebound in the exchange rate, and we will be closely watching the 79.00 figure as it appears to be holding up as support.