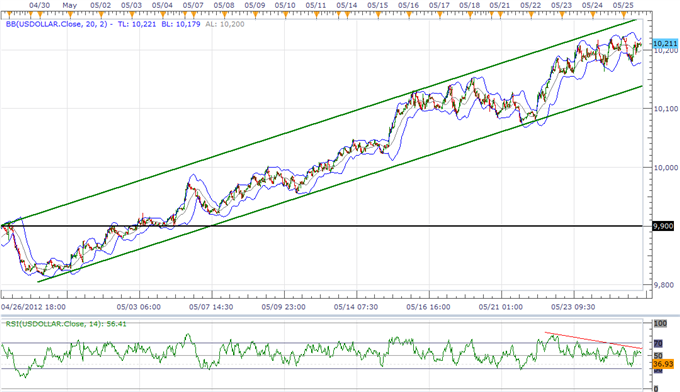 The Dow Jones-FXCM U.S. Dollar Index (Ticker: USDollar) remains 0.07 percent higher from the open after moving 89 percent of its average true range, but we are still watching the bearish divergence in the 30-minute relative strength index as the greenback appears to be carving out a top in May. In turn, we may see the greenback threaten the upward trending channel from earlier this month, and the index may ultimately fall back towards the 10,100 figure to test for support. However, as Fed officials continue to take note of the more robust recovery, the less dovish tone struck by U.S. policy makers should continue to prop up the reserve currency, and we may see the dollar hold steady going into the following as market participants weigh the prospects for future policy. 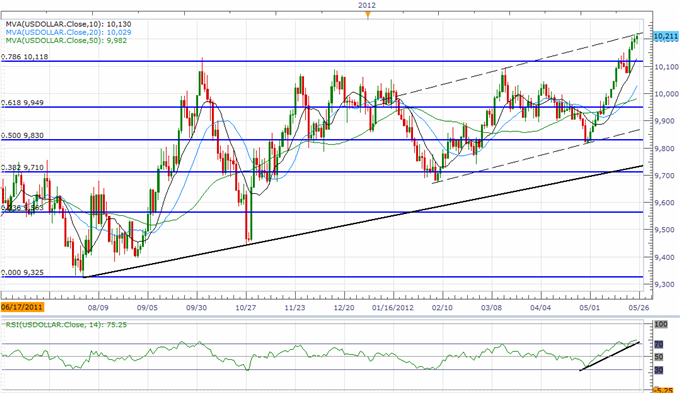 As the preliminary 1Q GDP report is expected to show a slower rate of growth for the world’s largest economy, a downward revision from the initial forecast may drag on the dollar, but the U.S. Non-Farm Payrolls report presents the biggest even risk for the following week as the Fed continues to highlight the ongoing weakness in the labor market. Although we’re expecting to see another 150K rise in employment, a below-forecast print could fuel a short-term reversal in the USDOLLAR, but an upbeat release may push the index to fresh highs as it dampens speculation for additional monetary support. As the relative strength index maintains the upward trend carried over from the previous month, we need to see the oscillator fall back below 70 to pave the way for a short-term correction, and the dollar may continue to threaten the topside of the upward trending channel as negative headlines coming out of Europe fuels the flight to safety.

The greenback advanced against three of the four components, led by a 0.14 percent decline in the Euro, while the Australian dollar advanced 0.05 on hold within the previous day’s range. As market participation thins ahead of the holiday weekend, we should see the high-yielding currency hold steady going into the following week, and the aussie may snap back in the days ahead as the economic docket is expected to reinforce an improved outlook for the region. As the slew of event risks on tap for the last week of May is expected to show a rebound in building activity paired with a rise in business investments, a round of positive developments may prop up the AUDUSD, but we are still fairly bearish on the Australian dollar as market participants see the Reserve Bank of Australia carrying its easing cycle into the second-half of the year. In turn, a short-term correction in the AUDUSD should present an opportunity to sell the pair, and we will look for fresh lows in the exchange rate as interest rate expectations deteriorate.