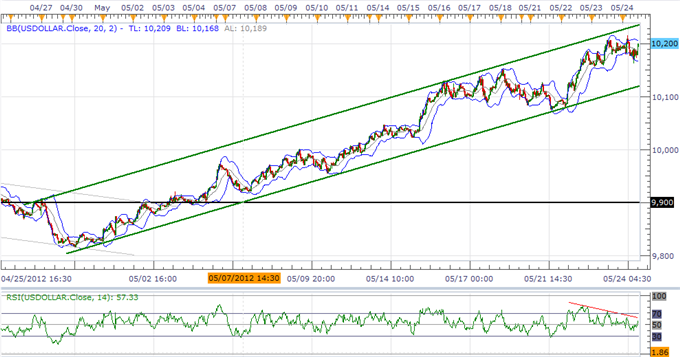 The Dow Jones-FXCM U.S. Dollar Index (Ticker: USDollar) is 0.06 percent higher from the open after moving 112 percent of its average true range, but we may see the greenback threaten the upward trending channel from earlier this month as there appears to be a bearish divergence in the 30-minute relative strength index. In turn, we may see the dollar fall back towards the 10,100 figure to test for interim support. However, the headline-driven market may continue to prop up the reserve currency as market sentiment remains frail. As the threat of a Greek exit continues to drag on investor confidence, the fight to safety may resurface in the days ahead, and we will maintain our bullish forecast for the USD as the Federal Reserve continues to soften its dovish tone for monetary policy. 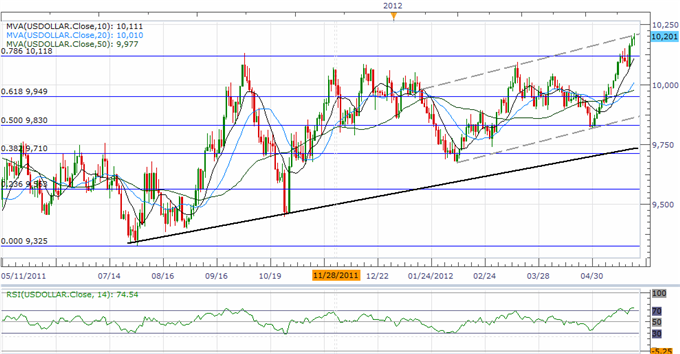 As the USDOLLAR remains overbought, the greenback looks poised for a short-term pullback, but we need to see the RSI fall back below 70 to see a correction take shape. Nevertheless, New York Fed President William Dudley, who also serves as a permanent member on the FOMC, said its ‘hard to argue’ for more monetary easing as the recovery gradually gathers pace, and went onto say that he’s a ‘little bit more confident’ that the economy is getting on a more sustainable path as he sees a limited risk for a Japanese-style deflation. In light of the recent comments, we should see the Fed continue to move away from its easing cycle, and the central bank may sound a bit more hawkish in the second-half of the year amid the stickiness in underlying inflation. In turn, we should see the index maintain the broad upward trending channel from earlier this year, and we may see the reserve currency carve out a higher low ahead of the second-half of the year Fed Chairman Ben Bernanke keeps the door open to expand monetary policy further.

Once again, three of the four components weakened against the greenback, led by a 0.21 percent decline in the Euro, while the Japanese Yen advanced another 0.02 percent against its U.S. counterpart even as the Bank of Japan pledges to expand monetary policy further. As positive real interest rate in Japan continue to increase the appeal of Yen, we should see the USDJPY maintain the downward trending channel from back in March, but the pair appears to be carving out a short-term floor around the 79.00 figure as the RSI comes off of its lows. In turn, we may see the pair hold steady going into the end of the week, but we will need to see the BoJ take a more aggressive approach in easing monetary policy to see another meaningful move to the upside.