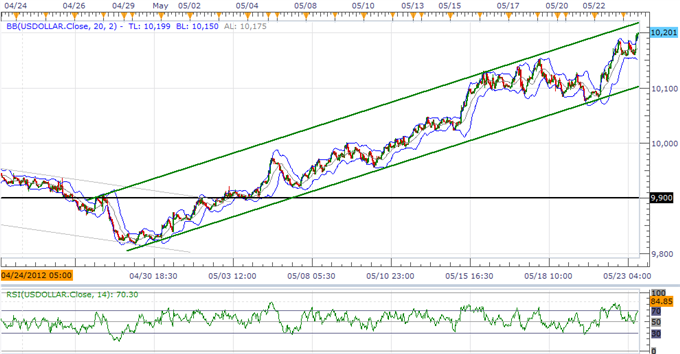 The Dow Jones-FXCM U.S. Dollar Index (Ticker: USDollar) is 0.38 percent higher from the open after moving 94 percent of its average true range, and the greenback may continue to appreciate against its major counterparts as market participants scale back their appetite for risk. As the flight to safety gathers pace, we should see the upward trending channel continue to take shape, but we will need to keep a close eye on the relative strength index as it fails to carve out a higher high. As the oscillator continues to come off of overbought territory, the short-term pullback in the index may ultimately turn into a larger correction, and we may see the 10,200 figure provide psychological resistance, but the head-line driven market may continue to prop up the reserve currency as European policy makers struggle to restore investor confidence. 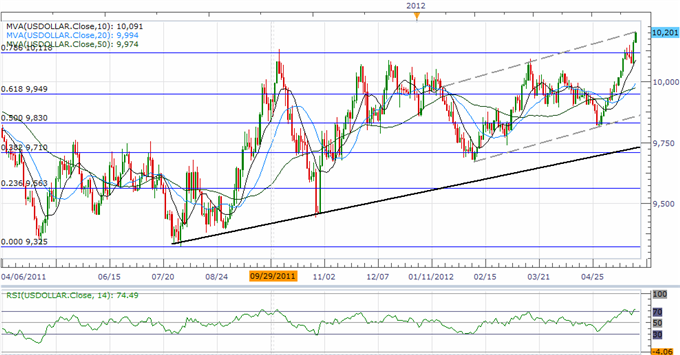 As the USDOLLAR comes up against the upper bounds of the upward trending channel, the greenback looks poised for a correction, and we will be keeping a cautious eye on the relative strength index as it continues to flirt with overbought territory. At the same time, we will be closely watching the 10-Day SMA (10,090) as it should provide interim support, but we may see the dollar fallback towards the 61.8 percent Fib around 9,949 (higher low) before carving out a higher high. However, as market participants turn their attention to the EU Summit, the renewed efforts to stem the risk for contagion may do little to restore investor confidence, and the headlines coming out of the euro-area may continue to increase the appeal of the reserve currency as the governments operating under the fixed-exchange rate system continue to move in their own interest. In turn, the meeting may reveal a growing rift within the EU, and we will maintain our bullish forecast for the USD as it continues to benefit from safe-haven flows.

Three of the four components weakened against the greenback, led by a 1.04 percent decline in the Australian dollar, and the high-yielding currency is likely to face additional headwinds over the next 24-hours of trading as the shift away from risk-taking behavior picks up. As the AUDUSD searches for support, we are looking at the 50.0 percent Fib from the 2010 low to the 2011 high around 0.9570-0.9600, and we will preserve bearish outlook for the aussie-dollar as interest rate expectations deteriorate. According to Credit Suisse overnight index swaps, market participants are pricing a 59 percent chance for another 50bp rate cut in June, but see borrowing costs falling by more than 125bp over the next 12-months as the fundamental outlook for the region deteriorates.