USD Looks Toward Broader Fundamentals, JPY May Rally On BoJ

The Dow Jones-FXCM U.S. Dollar Index (Ticker: USDollar) remains 0.60 percent higher from the open after moving 116 percent of its average true range, but the technical outlook certainly paints a bearish picture for the greenback as the index fails to maintain the upward trending channel from earlier this month. In turn, we may see the dollar consolidate going into the middle of the week, and the pullback from 10,134 may turn into a larger correction as the 30-minute relative strength index falls back from overbought territory. However, as the reserve currency continues to benefit from flight to safety, the drop in risk-taking behavior may continue to increase the appeal of the greenback, and the dollar may continue to track higher ahead of the EU Summit as European policy makers struggle to restore investor confidence. 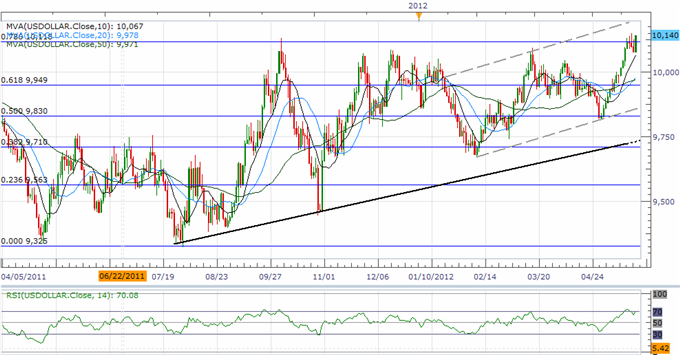 As the USDOLLAR creeps back above the 78.6 percent Fibonacci retracement around 10,118, we will be keeping a close eye on the relative strength index, and we may see the greenback press higher over the remainder of the week as the oscillator flirts with overbought territory. Nevertheless, Atlanta Fed President Dennis Lockhart, who also serves on the FOMC this year, continued to talk down speculation for more easing, stating that the ‘bar remains high’ for another large-scale asset purchase program, and we should see the central bank continue to move away from its easing cycle as the economic recovery gradually gathers pace. In turn, we will maintain our bullish outlook for the greenback, and we should see fundamentals play an increased role in dictating price action for the USD as the Fed continues to soften its tone for monetary policy.

The greenback rallied across the board, led by a 0.85 percent decline in the Japanese Yen, and the low-yielding currency may face additional headwinds over the next 24-hours of trading as market participants see the central bank taking additional steps to shore up the ailing economy. The Yen tumbled lower after Fitch cut Japan’s credit rating to A+ from AA-, and we may see the BoJ continue to expand its asset purchase program in an effort to stem the risk for deflation. However, we will need to see the BoJ take a more aggressive approach as the low-yielding currency strengthened after the central bank added JPY 10T in April, and we may see the Governor Masaaki Shirakawa face increased pressure to intervene in the foreign exchange market as the ongoing strength in the local currency dampens the scope for an export-led recovery.