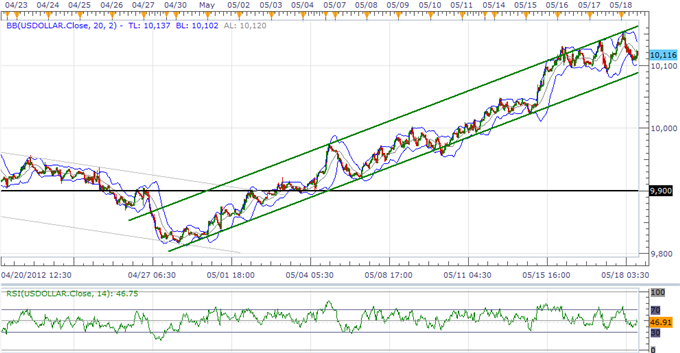 The Dow Jones-FXCM U.S. Dollar Index (Ticker: USDollar) remains 0.03 percent higher from the open after moving 105 percent of its average true range, and we may see the greenback consolidate throughout the North American trade as hopes surrounding the G8 Summit props up market sentiment. However, as the EU struggles to meet on common ground, there’s certainly limited scope of seeing something done on a global scale, and we should see the flight to safety gather pace in the days ahead as the heightening risk for contagion saps risk-taking behavior. In turn, the upward trending channel should continue to take shape in the week ahead, and we will be watching for fresh 2012 highs in the index as the economic docket is expected to highlight an improved outlook for the U.S. economy. 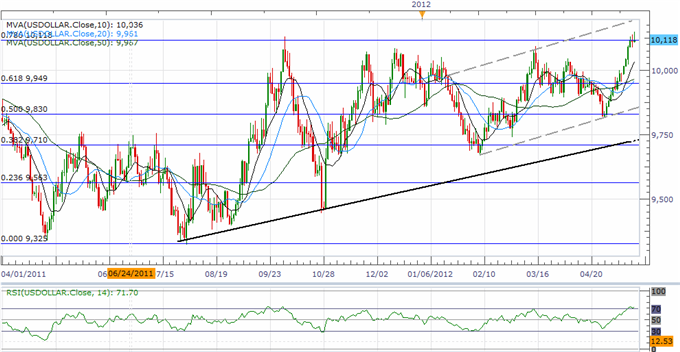 Although the USDOLLAR remains overbought, the drop in risk-taking behavior continues to increase the appeal of the reserve currency, and we will need to see the oscillator fall back below 70 to pave the way for a short-term correction. As the fundamental developments on tap for the following week are expected to show a rise in home sales paired with a rebound in U.S. durable goods, a slew of positive developments should heighten the bullish sentiment underlining the greenback, and we may see the fundamentals play an increased role in dictating price action as it dampens speculation for additional monetary support. However, as the index struggles to hold above the 78.6 percent Fibonacci retracement around 10,118, the dollar may be carving out a higher high in May, and we will be looking for a higher low as the greenback looks poised for a correction. In turn, we may see the 61.8 percent Fib around 9,949 come in as new support, and we will maintain our bullish call for the USD as the Fed slowly moves away from its easing cycle.

Two of the four components weakened the greenback, led by a 0.62 percent decline in the Australian dollar, and the high-yielding currency may face additional headwinds in the week ahead as the growth outlook for the $1T economy deteriorates. Beyond the headlines coming out of Europe, developments coming out of China – Australia’s largest trading partner – may continue to stoke fears of a ‘hard landing,’ and we may see market participants increase bets for lower borrowing costs as the Reserve Bank of Australia looks to carry its easing cycle into the second-half of the year. According to Credit Suisse overnight index swaps, market participants are pricing a 73 percent chance for another 50bp rate cut at the next rate decision on June 5th, and the AUDUSD may continue to give back the rebound from back in November as it searches for support.