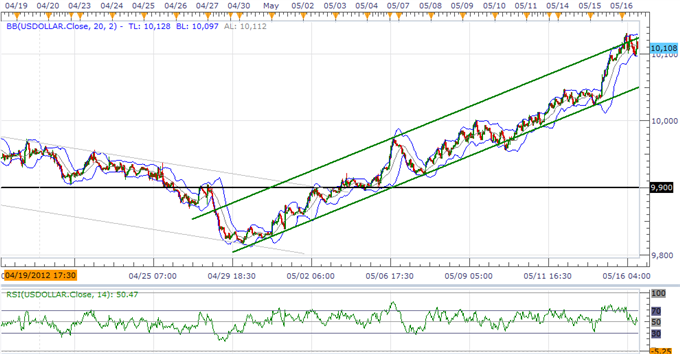 The Dow Jones-FXCM U.S. Dollar Index (Ticker: USDollar) remains 0.08 percent higher from the open after moving 82 percent of its average true range, and the greenback may track higher over the remainder of the week as the upward trending channel continues to take shape. As the flight to safety gathers pace, the shift away from risk-taking behavior should further increase the appeal of the greenback, but we may see the dollar hold steady going into the FOMC minutes as the board maintains a cautious outlook for the world’s largest economy. As an increasing number of central bankers expect to see a more robust recovery and take note of the stickiness in price growth, we should see the Fed continue to soften its dovish tone for monetary policy, but Chairman Ben Bernanke may keep the door open to expand monetary policy further as the sovereign debt crisis continues to pose a threat to the global financial system. 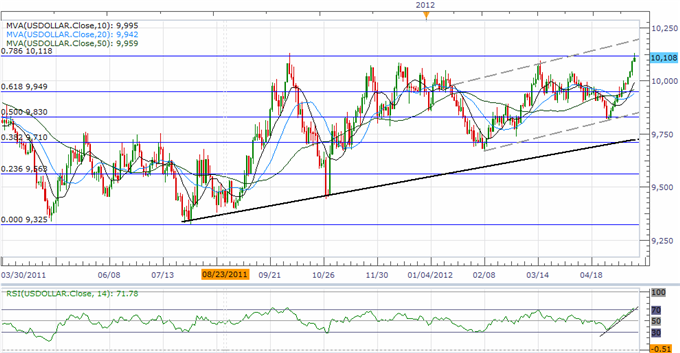 As the USDOLLAR clears the 78.6 percent Fibonacci retracement around 10,118, we will be looking for a close above the key figure to see the rally gather pace, and the greenback may continue to mark fresh highs for 2012 as the relative index continues to push into overbought territory. As the fundamental outlook for the U.S. continues to improve, the FOMC may sound more hawkish this time around, and we may see the committee move away from its easing cycle as growth and inflation picks up. However, as Fed Chairman Bernanke continues to highlight the risks surrounding the real economy, we may see the central bank head renew speculation for more quantitative easing, and dovish comments coming out of the central bank may spark a short-term reversal in the index as the rally remains overbought. Nevertheless, as the index carves out a lower high coming into May, we are still watching the broad ascending triangle carried over from the previous year, and the bullish pattern should continue to take shape in the coming months as market participants start to look for a rate hike from the FOMC.

The greenback rallied against all four components on Wednesday, led by a 0.38 percent decline in the British Pound, while the Japanese Yen weakened another 0.18 percent. It seems as though the USDJPY has carved out a bottom in May as the pair breaks out of the downward trending channel carried over from April, and the exchange rate looks posed to resume the advance from earlier this year as the Bank of Japan struggles to address the risks surrounding the world’s third-largest economy. Indeed, the BoJ halted its asset purchase program as it struggled to obtain enough government securities to meet its JPY 600B target, and the central bank may face increased pressure to utilize additional policy tools to shore up the ailing economy. As the ongoing strength in the local currency continues to undermine the efforts taken by the BoJ, there may be increased calls to intervene in the foreign exchange market, and we will maintain our bullish call for the USDJPY as the central bank looks to carry its easing cycle into the second-half of the year.