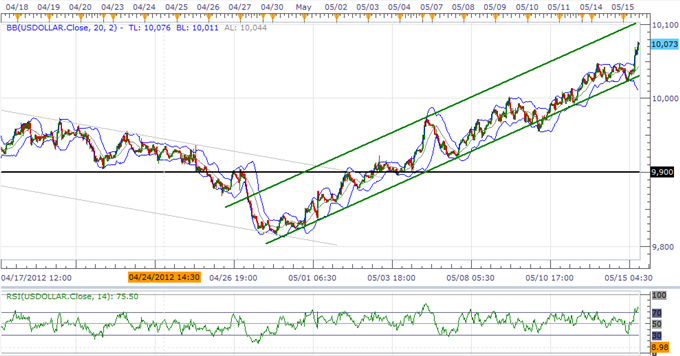 The Dow Jones-FXCM U.S. Dollar Index (Ticker: USDollar) added another 0.30 percent on Tuesday as the upward trending channel continues to take shape, and we may see the greenback appreciate further over the remainder of the week as the flight to safety gathers pace. As the 30-minute relative strength index pushes deeper into overbought territory, the dollar may continue to gain ground throughout the North American trade, but we should see a short-term pullback once the oscillator falls back below 70. As market participants turn their attention to the FOMC Minutes on tap for Wednesday, we may see the dollar consolidate going into the middle of the week, but the fresh batch of central bank rhetoric may prop up the greenback should the committee continue to talk down speculation for another large-scale asset purchase program. 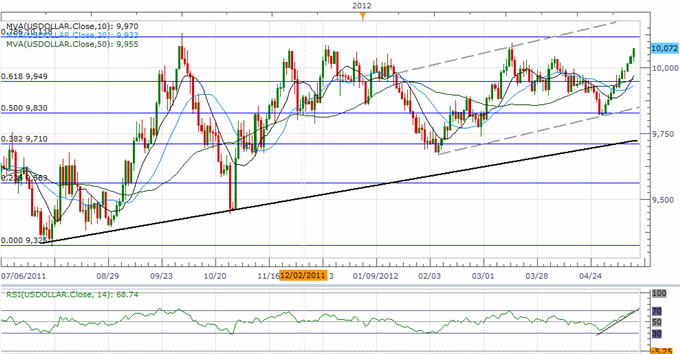 The upward trend in the USDOLLAR paired with the rise in the relative strength index reinforces a bullish outlook for the reserve currency, and the index looks poised to mark a run at the 78.6 percent Fibonacci retracement around 10,118 as the fundamental outlook for the world’s largest economy continues to improve. Indeed, the FOMC may sound more hawkish this time around amid the resilience in private consumption along with the stickiness in price growth, and we should see the central bank move away from its easing cycle as the recovery gradually gathers pace. However, Fed Chairman Ben Bernanke may keep the door open to expand the balance sheet further as ongoing turmoil in the global financial system continues to pose a risk to for the world economy, and we may see a growing rift within the committee as central bank officials expect to see a stronger recovery in the second-half of the year. In turn, we may see market participants increase bets for a rate hike, and the dollar should track higher going into the second-half of the year as we expect the FOMC to lay out a tentative exit strategy in the coming months.

Three of the four components weakened against the greenback, led by a 0.46 percent decline in the Euro, while the British Pound shed 0.44 percent as market participants scaled back their appetite for risk. Indeed, the sterling may face additional headwinds over the next 24-hours of trading as market participants see the Bank of England lowering its growth forecast for the U.K. while keeping the door open to expand its balance sheet further, but we expect to see the central bank target the stickiness in underlying inflation as its price-stability mandate remains under scrutiny. As BoE officials anticipate to see a more robust recovery in the second-half of 2012, the MPC may shift gears at the turn of the year, and we may see the central bank start to discuss withdrawing monetary support as policy makers no longer see a risk of undershooting the 2 percent target for inflation. In turn, we should see the upward trend in the GBPUSD continue to take shape, and we are looking for fresh yearly highs in the exchange rate as the committee looks to conclude its easing cycle.