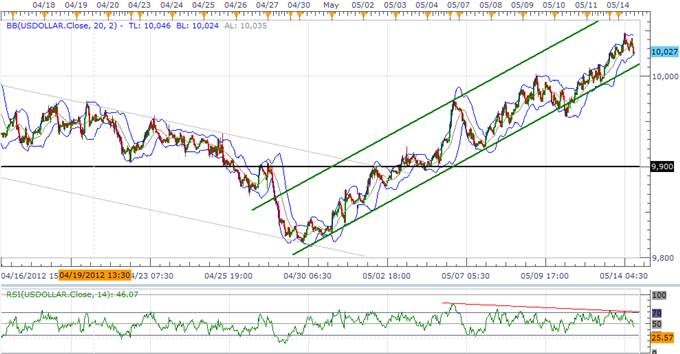 USD Rally At Risk Ahead Of FOMC Minutes, AUD At Risk Amid RBA Minutes

The Dow Jones-FXCM U.S. Dollar Index (Ticker: USDollar) is 0.11 percent higher from the open after moving 70 percent of its average true range, and the greenback looks poised to appreciate further in the coming days as the upward trending channel continues to take shape. However, as the 30-minute relative strength index falls back from overbought territory, with the oscillator carving out a series of lower highs, the small pullback may ultimately turn into a larger correction, and the bearish divergence may push the pair back towards 9,900 to test for near-term support. As market participants turn their attention to the FOMC meeting minutes due out on Wednesday, we may see the dollar consolidate going into the middle of the week, but the fresh batch of central bank rhetoric may prop up the reserve currency should the central bank continue to soften its dovish tone for monetary policy. 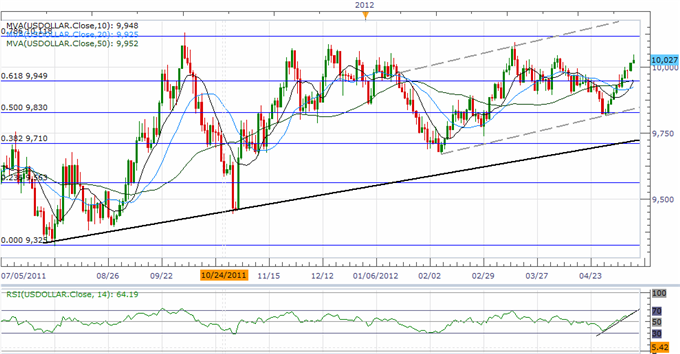 As the FOMC Minutes highlight the biggest event risk for this week, there’s speculation that the Fed will keep the door open to expand monetary policy further, but we may see a growing rift within the committee as Chairman Ben Bernanke continues to talk up expectations for another large-scale asset purchase program. It seems as though an increasingly number of the FOMC wants to move away from the easing cycle as the economic recovery gradually gathers pace, and central bank officials may sound more hawkish this time around as the stickiness in underling price growth raises the risk for inflation. As a result, we may see the group lean away from its 2014 pledge, and the committee may start to discuss an exit strategy as the world’s largest economy gets on a more sustainable path. As the relative strength index maintains the upward trend from earlier this month, we are still looking for a run at the 78.6 percent Fib around 10,118, and the policy statement may reinforce our bullish call for the USD should the Fed conclude its easing cycle this year.

The greenback rallied against two of the four components, led by a 0.57 percent decline in the Euro, while the Australian dollar slumped another 0.30 percent amid the flight to safety. As market participants see the Reserve Bank of Australia carrying its easing cycle into the second-half of the year, the meeting minutes on tap for later tonight may reinforce a bearish outlook for the high-yielding currency, and the central bank may implement a series of rate cuts in order to combat the slowing recovery. As the government shoots for a A$1.54B budget surplus for the fiscal year starting July 1, the increased effort to balance public finances certainly gives the RBA greater scope to shore up the ailing economy, and a dovish statement could trigger another selloff in the AUDUSD as market participants increase bets for lower borrowing costs. In turn, we may see the aussie-dollar make another run at the 38.2 percent Fib from the 2010 low to the 2011 high around 0.9930-50, and the high-yielding currency is likely to face additional headwinds over the course of the year as growth and inflation in the $1T economy falters.