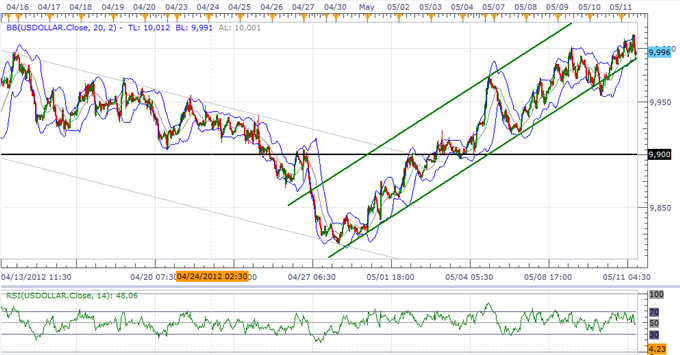 The Dow Jones-FXCM U.S. Dollar Index (Ticker: USDollar) remains 0.10 higher from the open after move 67 percent of its average true range, and the greenback should continue to retrace the decline from the previous month as the upward trending channel gathers pace. As the above-forecast the U. of Michigan consumer confidence survey raises the outlook for growth, easing bets for another round of quantitative easing should continue to prop up the dollar, but we may see the reserve currency hold steady throughout the North American trade as the relative strength index comes off of overbought territory. Although the economic docket for the following week is expected to show the headline reading for inflation falling back to an annualized rate of 2.4% in April, the stickiness in underlying price growth may encourage the FOMC to drop its dovish tone for monetary policy, and we may see the central bank start to discuss a tentative exit strategy as the recovery gradually gathers pace. 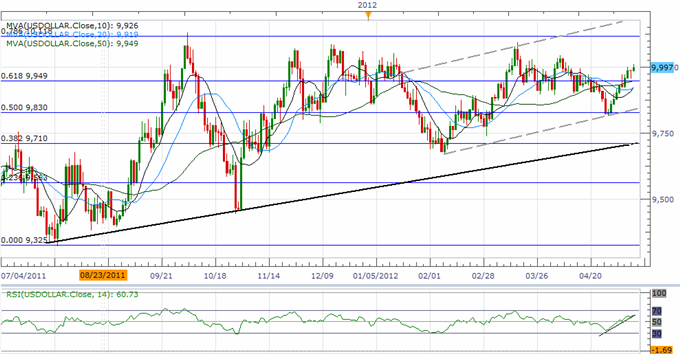 Indeed, the FOMC Minutes highlight the biggest event risk for the following week, and the central bank may sound more hawkish this time around as the outlook for growth and inflation picks up. At the same time, we may see a growing rift within the committee as Fed Chairman Ben Bernanke leaves the door open to expand the balance sheet further, and the central bank may mull the 2014 pledge for its zero interest rate policy as the economy gets on a more sustainable path. As the Fed moves away from its easing cycle, we should see the bullish trend in the USDOLLAR continue to take shape, and we may see the index make another run at the 78.6 percent Fibonacci retracement around 10,118 should the central bank see scope to start normalizing monetary policy later this year. As the RSI maintains the upward trend from the beginning of the month, the dollar should continue to track higher in the coming days, but we may see a short-term correction ahead of June as the ascending triangle formation remains in play.

Two of the four components weakened against the greenback, led by a 0.33 percent decline in the British Pound, but the sterling may regain its footing next week should the Bank of England strike an improved outlook for the U.K. As the quarterly inflation comes into focus, we may see the BoE adopt a hawkish outlook for monetary policy amid the stickiness in underlying price growth, and the central bank may see scope to raise the benchmark interest rate off of the record-low as policy makers anticipate to see a faster recovery in the second-half of the year. However, as Britain slips back into recession, there’s speculation that the BoE will stick to its wait-and-see approach as the ongoing turmoil in the euro-area – the U.K.’s largest trading partner – dampens the prospects for future growth. In turn, we may see the GBPUSD continue to give back the advance from the previous month, but we should see former resistance around 1.6000 act as new support as the pair maintains the upward trend from earlier this year.