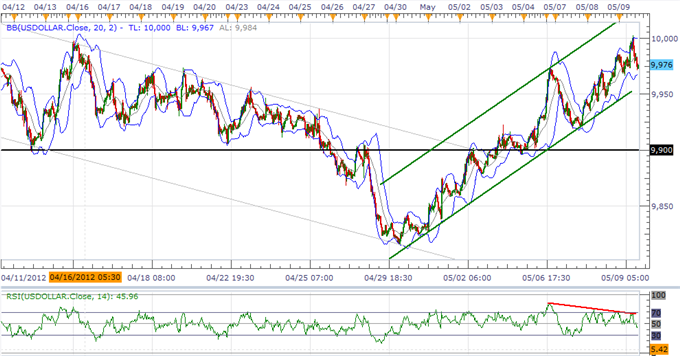 The Dow Jones-FXCM U.S. Dollar Index (Ticker: USDollar) remains 0.19 percent higher from the open after moving 94 percent of its average true, and the reserve currency may track higher over the remainder of the week as the upward trending channel continues to take shape. However, as there appears to be a bearish divergence in the 30-minute relative strength index, the lack of momentum to hold above the 10,000 figure may produce a short-term correction in the index, and we may see the dollar fall back threaten the lower bounds of the channel around 9,950. Nevertheless, we’re still bullish on the greenback as Fed policy makers continue to soften their dovish tone for monetary policy, and the dollar should appreciate further going into the second-half of the year as the shift in central bank rhetoric dampens expectations for another large-scale asset purchase program. 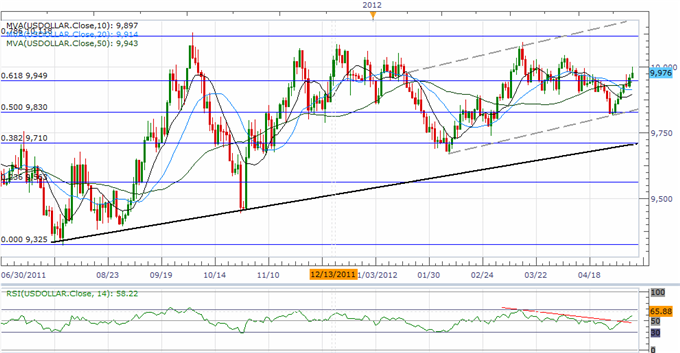 FOMC voting member Sandra Pianalto continued to highlight an improved outlook for the world’s largest economy as she expects growth to increase 2.5% or more this year, while Minneapolis Fed President Narayana Kocherlakota argued the central bank may need to withdraw stimulus in the next six to nine months as the recovery gradually gathers pace. As Fed officials raise their fundamental assessment, we should see the FOMC start to discuss a tentative easing strategy, and we may see the central bank ultimately drop its 2014 pledge for the zero interest rate policy as the more robust recovery raises the risk for inflation. In turn, we are still looking for a run at the 78.6 percent Fibonacci retracement around 10,118, and the bullish sentiment surrounding the USD should gather pace going into the second-half of the year amid the shift in the Fed’s policy outlook.

Once again, three of the four components weakened against the greenback, led by a 0.47 percent decline in the Australian dollar, and the high-yielding currency may face additional headwinds over the next 24-hours of trading as the economic docket is expected to reinforce a weakened outlook for the region. Australia is expected to shed 5.0K jobs in April following the 44.0K expansion during the previous month, and the slowdown in employment may spark another selloff in the AUDUSD as it raises the scope for another rate cut. As the fundamental outlook for the $1T economy deteriorates, it seems as though the RBA is going to embark on a series of rate cuts, we should see the RBA carry its easing cycle into the second-half of the year as the central bank aims to encourage a sustainable recovery. In turn, we may see the pair threaten parity going into the end of the week, but the pair may ultimately fall back towards the 38.2 percent Fib from the 2010 low to the 2011 high around 0.9930-50 as market participants anticipate to see lower borrowing costs in Australia.