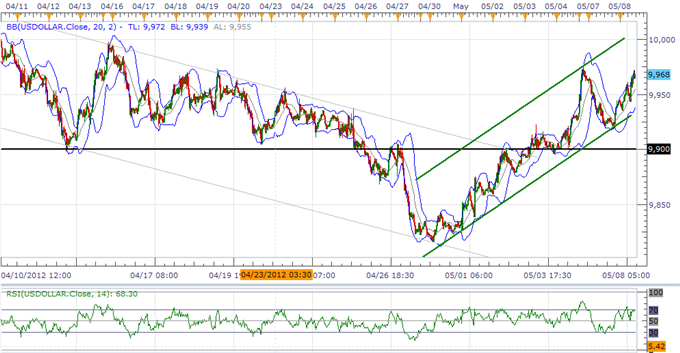 The Dow Jones-FXCM U.S. Dollar Index (Ticker: USDollar) is 0.40 percent higher from the open after moving 97 percent of its average true range, and we should see the greenback continue to retrace the decline from April as the upward trending channel from the beginning of the month continues to take shape. In turn, we should see the index work its way back towards the key 10,000 figure, and we will maintain our bull call for the dollar as the Federal Reserve continues to soften its dovish tone for monetary policy. Nevertheless, we may see a small pullback going into the middle of the weekas the 30-minute relative strength index moves back into overbought territory, but the shift in the Fed’s policy outlook should prop up the USD as the central bank continues to talk down speculation for additional monetary support. 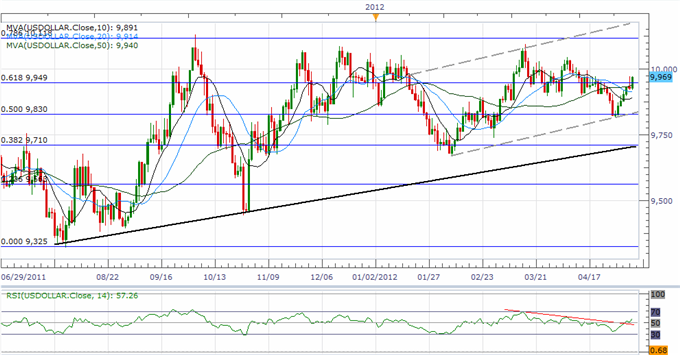 Indeed, New York Fed President William Dudley, who also serves as a permanent member of the FOMC, continued to soften his dovish tone for monetary policy amid the stickiness in underlying inflation, and said that the central bank will bring quantitative easing to a halt ‘‘the moment they become inconsistent with our dual mandate objectives.’ As the more robust recovery raises the risk for inflation, we should see the Fed move away from its easing cycle, and the central bank may start to discuss a tentative exit strategy as the economy gets on a more sustainable path. As the index continues to carve out a series of higher lows, we are still looking for another run at the 78.6 percent Fibonacci retracement around 10,118, and we should see currency traders turn increasingly bullish against the USD as the Fed continues to curb speculation for another large-scale asset purchase program.

Three of the four components weakened against the greenback, led by a 0.99 percent decline in the Australian dollar, while the Japanese bucked the trend to advance 0.14 percent on the day. Although the USDJPY continues to trade within a downward trending channel, we’re still watching the bullish flag formation as it appears to be building a short-term base around the 100-Day SMA at 76.65. In turn, the dollar-yen looks poised to reverse course, and we should see the pair resume the advance from earlier this year as the Bank of Japan pledges to carry its easing cycle into the second-half of 2012. As a result, we need to see the pair clear and close above the 20-Day SMA (80.62) to see a meaningful rebound in the exchange rate, and we expect to see fresh yearly highs in the USDJPY amid the deviation in the policy outlook.