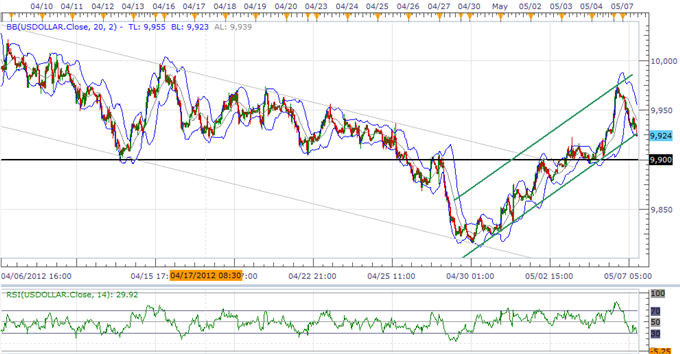 The Dow Jones-FXCM U.S. Dollar Index (Ticker: USDollar) is 0.05 percent lower from the open after moving 109 percent of its average true range, and we may see the greenback fall back towards the 9,900 figure to test for near-term support. As the U.S. equity market pares the decline from the open, the shift in risk sentiment may continue to dampen the appeal of the greenback, but the recent weakness in the reserve currency is likely to be short-lived as the relative strength index appears to be coming off of oversold territory. As the USDOLLAR breaks out of the bearish formation carried over from the previous month, the index looks to be carving fresh upward trending channel in May, and the reserve currency may continue to retrace the decline from April as the Federal Reserve moves away from its easing cycle. 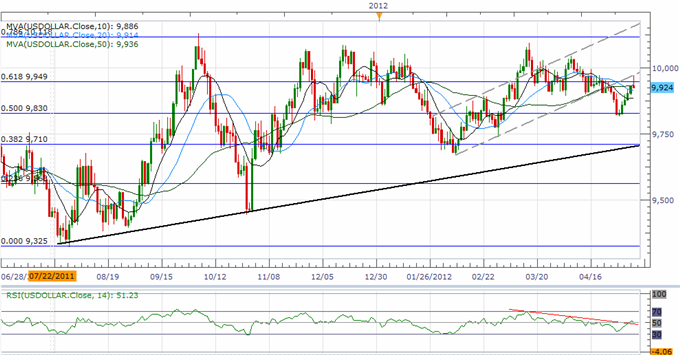 As the USDOLLAR struggles to hold above the 61.8 percent Fibonacci retracement around 9,949, it looks as though former channel support could be acting as resistance, but we expect to see the rebound gather pace as the relative strength index breaks out of the bearish trend. As the index carves out a higher low coming into May, we should see the dollar push back above the 10,000 figure, and we will maintain our bullish call for the greenback as Fed officials turn their attention to the stickiness in underlying inflation. As the majority of the FOMC - Jeffrey Lacker, John Williams, Dennis Lockhart, William Dudley, Janet Yellen, and Sandra Pianalto – take note of the more robust recovery, we should see the committee continue to talk down speculation for another round of quantitative easing, and the board may start to draw up a tentative exit strategy as they anticipate to see a stronger recovery in the second-half of the year. As the Fed looks to conclude its easing cycle, the shift in the policy outlook should drive the dollar higher over the remainder of the year, but central bank Chairman Ben Bernanke may keep the door open to expand policy further as the fundamental outlook for the global economy remains clouded with high uncertainty.

Two of the four components advance against the dollar, led by a 0.27 percent rally in the British Pound, and the sterling may continue to appreciate against the greenback as the Bank of England adopts a hawkish tone for monetary policy. Although the BoE is widely expected to retain its current policy in May, the central bank may continue to highlight a greater risk for inflation amid the stickiness in underlying price growth, and the Monetary Policy Committee may adopt a hawkish tone for monetary policy as central bank officials expect to see a more robust recovery later this year. As the GBPUSD maintains the upward trend from earlier this year, we should see fresh 2012 highs going forward, but the short-term correction in the exchange rate may continue to take shape this week as we anticipate to see a test of 1.6000 for support.