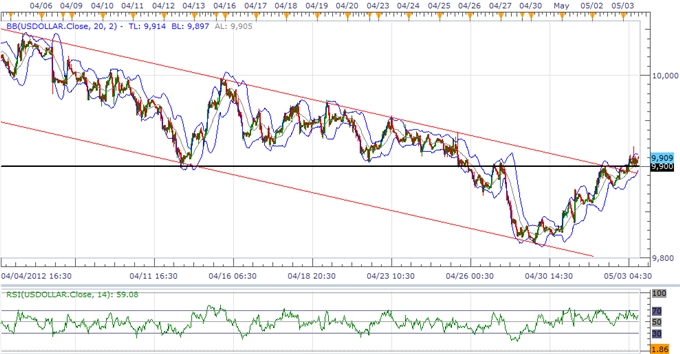 The Dow Jones-FXCM U.S. Dollar Index (Ticker: USDollar) is 0.28 percent higher from the open after moving 85 percent of its average true range, and it looks as though the greenback is building a short-term base ahead of NFPs as it breaks out of the downward trending channel carried over from the previous year. As the index trades back above 9,900, a positive development should prop up the dollar, but the greenback looks as though it will hold steady ahead of the employment report as the 30-minute relative strength index falls back from overbought territory. Indeed, NFPs will have a broader implication for the reserve currency as market participants continue to call for another round of easing, but we will also be closely watching the wage growth figures as the Fed softens its dovish tone for monetary policy. 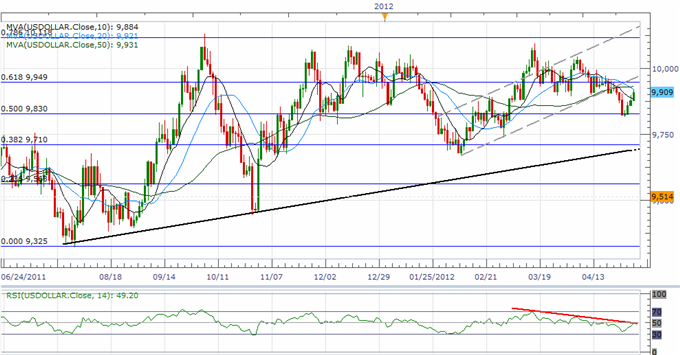 As the USDOLLAR carves out a higher low in May, the short-term rebound looks poised to gather pace, and we will be closely watching the relative strength index as it threatens the downward trend carried over from earlier this year. Indeed, it seems as though the Fed is moving away from its easing cycle as the more robust recovery raises the risk for inflation, and an uptick in wage growth paired with a strong employment report could bring about a hawkish outlook for monetary policy as Fed officials anticipate to see economic activity gradually gathering pace in the second-half of the year. In turn, we may see the FOMC lay out a tentative exit strategy going to the second-half of the year, but Fed Chairman Ben Bernanke may keep the door open to expand monetary policy further amid the uncertainties surrounding the global economy.

The dollar continued to rally across the board on Thursday, led by a 0.69 percent decline in the Australian dollar, while the Japanese Yen shed another 0.26 percent. We’re still watching the bullish flag on the USDJPY as pair continues to come off of the 100-Day SMA (79.60), but we need to see a break and a closely above the 20-Day SMA (80.85) to see the pair resume the advance from earlier this month. As the Bank of Japan pledges to carry out its easing cycle throughout 2012, we will maintain a bearish outlook for the Yen, and we will be keeping a close eye on the RSI as it threatens the downward trend carried over from March.