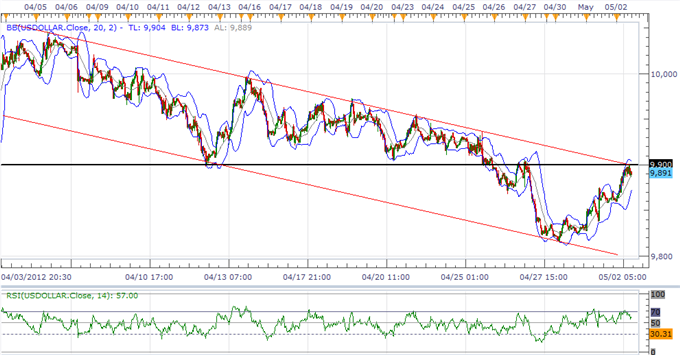 The Dow Jones-FXCM U.S. Dollar Index (Ticker: USDollar) remains 0.31 percent higher on the day after moving 87 percent of its average true range, and the shift away from risk-taking behavior should continue to prop up the reserve currency as it benefits from safe-haven flows. However, as the index struggles to hold above former support around 9,900, the figure may act as new resistance, and we may see the greenback consolidate going into the end of the week as the downward trending channel continues to take shape. In turn, the rebound in the USD may be short-lived, but the greenback may ultimately breakout of the bearish formation should the developments coming out of the world’s largest economy dampen expectations for additional monetary support. 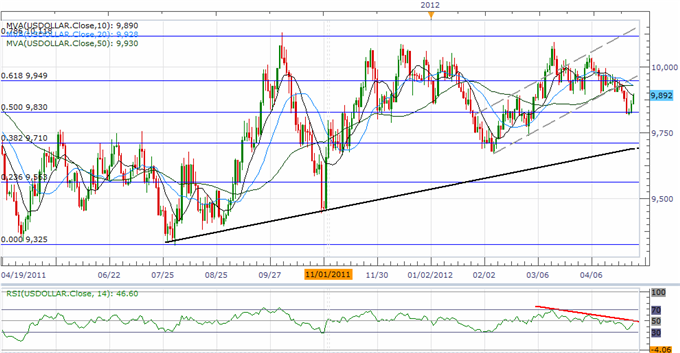 It looks as though the USDOLLAR has found interim support around the 50.0 percent Fibonacci retracement around 9,830, but the divergence in the relative strength index continues to cast a bearish outlook for the greenback as it maintains the downward trend carried over from March. Nevertheless, it seems as though San Francisco Fed President John Williams is joining Dennis Lockhart and Jeffery Lacker, who all serve on the FOMC this year, as he takes note of the more robust recovery, and it seems as though the committee will continue to move away from its easing cycle this year as growth and inflation gather pace. As the fundamental outlook for the world’s largest economy improves, we may see the Fed lay out a tentative exit strategy going into the second-half of the year, and the shift in the policy outlook certainly casts a bullish forecast for the USD as market participants scale back speculation for QE3.

The dollar rallied across the board on Wednesday, led by a 0.63 percent decline in the Euro, while the Australian dollar weakened another 0.30 percent amid the flight to safety. Meanwhile, Credit Suisse overnight index swaps continue to reflect expectations for lower borrowing costs, with market participants pricing the Reserve Bank of Australia to lower the benchmark interest rate by nearly 75bp over the next 12-months, and the high-yielding currency may continue to give back the advance from earlier this year as the central bank looks to carry its easing cycle into the second-half of the year. Although we’re still bearish on the AUDUSD, we need to see support around 1.0200 give way to see the pair fall back towards the 38.2 percent Fib from the 2010 low to the 2011 high around 0.9930-50, and we may see the aussie come under increased pressure over the next 24-hours of trading should the RBA’s monetary policy report heighten speculation for a series of rate cuts.