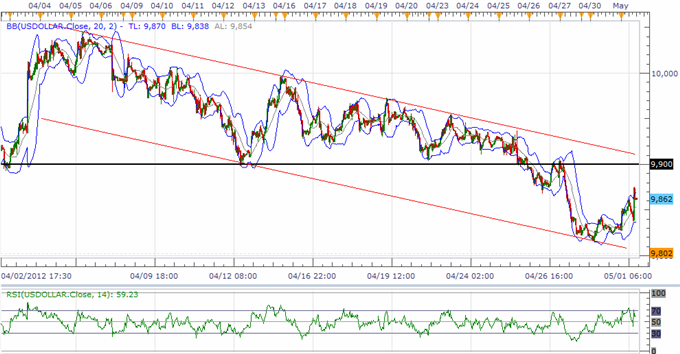 The Dow Jones-FXCM U.S. Dollar Index (Ticker: USDollar) is 0.37 percent higher after moving 99 percent of its average true range, and we may see the greenback consolidate going into the middle of the week as the two-day rally remains overbought. As the 30-minute relative strength index falls back from a high of 73, it looks as though the dollar will continue to track within the downward trending channel carried over from the previous month, but we may see risk sentiment taper off as the heightening threat for contagion continues to drag on investor confidence. As Spain is scheduled to auction three and five-year debt on Thursday, easing demands paired with higher financing costs would sap risk-taking behavior, and we may see the greenback continue to retrace the decline from the previous month as it appears to be carving out a higher low in May. 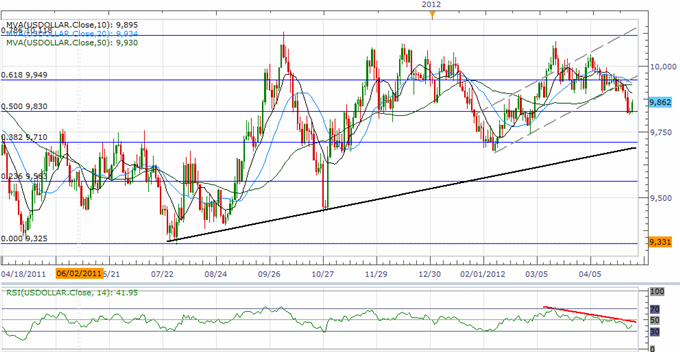 Indeed, the USDOLLAR appears to be finding interim support around the 50.0 percent Fibonacci retracement around 9,830, and we may see the greenback track higher ahead of the highly anticipated Non-Farm Payrolls report as the outlook for U.S. labor market picks up. As the ISM Manufacturing employment expands at a faster pace of the second month in April, the data certainly raises the outlook for NFP’s, and the greenback could be carving out a higher low in May as the developments coming out of the world’s largest economy continues to dampen expectations for another round of quantitative easing. Atlanta Fed President Dennis Lockhart, who serves on the FOMC this year, said that there would be a limit on the central bank’s balance sheet, while Richmond Fed President Jeffrey Lacker talked down the 2014 pledge and went onto say that he expects the committee to lift the benchmark interest rate in middle of the following year. In addition, Mr. Lacker said that more stimulus would do little for growth while raising the risk for inflation, and we should see the Fed continue to drop its dovish tone for monetary policy as central bank officials take note of the more robust recovery. Nevertheless, we’re still keeping a close eye on the bearish divergence in the RSI, but the short-term correction in the USD appears to be coming to an end as the oscillator approaches oversold territory.

Three of the four components weakened against the greenback, led by a 53 percent decline in the Australian dollar, which was following by a 0.19 percent drop in the British Pound. The pullback in the GBPUSD looks like the start of a short-term correction as the RSI falls back from overbought territory, but we will maintain our bullish call for the sterling as the upward trending channel from earlier this year continues to take shape. We’re looking at former resistance around the 1.6000 figure for support, which could ultimately turn out to be a higher low, and we will be looking for fresh 2012 highs in the GBPUSD as the Bank of England changes its tune for monetary policy. It seems as though the BoE will be the first to raise rates this year as central bank officials turn their attention to the stickiness in underlying inflation, and we should see the Monetary Policy Committee start to discuss a tentative exit strategy as price pressures in the U.K. gather pace. In turn, we should see the GBPUSD continue to recoup the losses from the previous year, and the pair looks poised to make a run at the August highs around 1.6600 as interest rate expectations pick up.