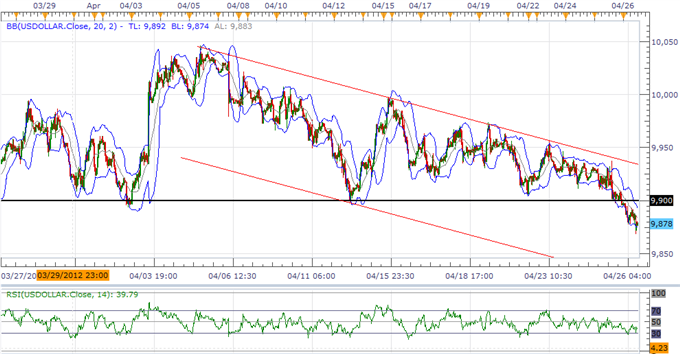 USD Searches For Support Ahead Of 1Q GDP, JPY Outlook Bearish On BoJ

The Dow Jones-FXCM U.S. Dollar Index (Ticker: USDollar) fell another 0.31 percent on Thursday as the cautious tone held by Fed Chairman Ben Bernanke renewed speculation for another large-scale asset purchase program, and we are certainly scaling back our bullish call for the dollar as interim support around 9,900 gives out. As the index breaks down from the descending triangle, the bearish formation foreshadows further declines for the reserve currency, but we may see the greenback consolidate going into the end of the week as the 30-minute relative strength index bounces back from oversold territory. However, as the downward trend takes shape, a rebound in the index could be short-lived, and we may see the dollar continue to give back the advance from earlier this year as market participants increase bets for additional monetary support. 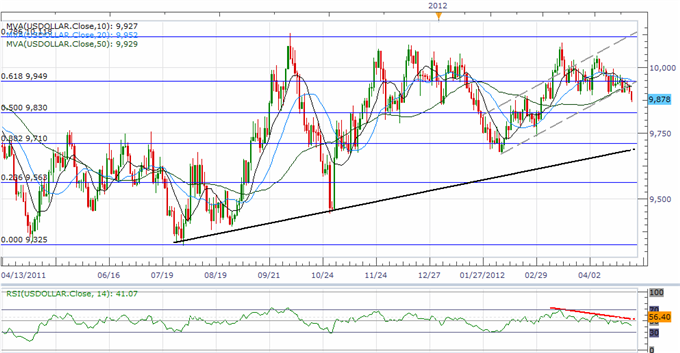 As Fed Chairman Bernanke keeps the door open to ease policy further, we may see the bearish divergence in the relative strength index continue to pan out in May, and the index looks poised to fall back towards the 50.0 percent Fibonacci retracement around 9,830 as it searches for support. Although we’re seeing market participants move on the fresh batch of rhetoric from Mr. Bernanke, the stickiness in underlying inflation may become a growing concern for the FOMC as central bank officials anticipate to see a stronger recovery in 2012. As the Fed drops its outlook for ‘subdued inflation,’ we should see the committee continue to move away from its easing cycle, and the dollar may regain its footing going into the second-half of the year as the fundamental outlook for the U.S. improves. As the Fed continues to undermine the underlying strength in theworld’s largest economy, we may see the central bank continue to raise its fundamental assessment for the region, and the board may see scope to start normalizing monetary policy later this year as growth and inflation picks up.

The greenback weakened across the board, led by a 0.68 percent advance in the Japanese Yen, but the low-yielding currency may struggle to hold its ground over the next 24-hours of trading as we expect the Bank of Japan to take additional steps to shore up the ailing economy. After maintaining its current policy earlier this month, there’s rumors that the BoJ will continue to sit on its hands ahead of May, but we may see the central bank increase its asset purchases as it pledges to achieve the 1 percent target for inflation. Indeed, recent rhetoric from Governor Masaaki Shirakawa suggests that the central bank will aggressively expand monetary policy to stem the risk for deflation, and it seems as though the BoJ will maintain its easing cycle for an extended period of time amid the ongoing slack in private sector activity. As the bullish flag in the USDJPY continues to take shape, we are still looking for a bullish breakout in the exchange rate, and we may see the pair climb to fresh yearly highs in May should the BoJ throw another JPY 5-10 trillion yen into the system.