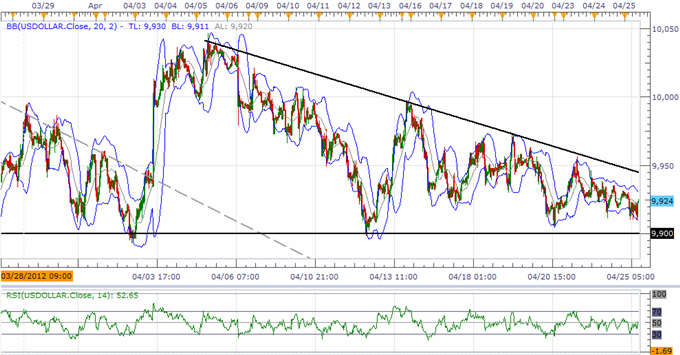 The Dow Jones-FXCM U.S. Dollar Index (Ticker: USDollar) is 0.04 percent lower from the open after moving 43 percent of its average true range, and we should see the greenback hold steady going into the FOMC interest rate decision as market participants weigh the outlook for monetary policy. Although the dollar remains stuck within a descending triangle, the reserve currency could be carving out a short-term base for a move higher as the 9,900 figure continues to provide interim support. Indeed, the dollar needs to hold this level to reinforce our bullish outlook for the dollar, and we may see the USD snap ahead of May as the Fed moves away from its easing cycle. However, a break below 9,900 would put the bearish formation in play, and we may see the greenback track lower over the remainder of the week should the central bank endorse another round of quantitative easing. 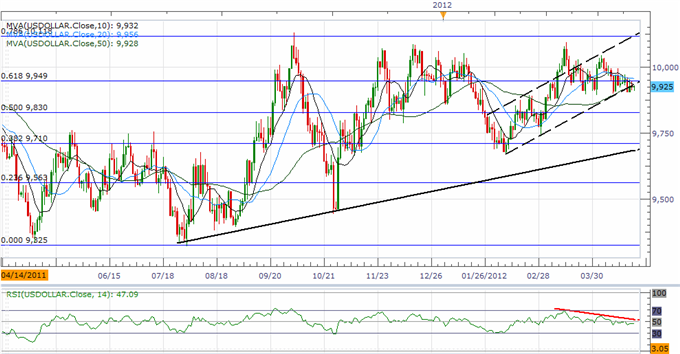 Indeed, market participants are still calling for QE3 amid the recent batch of weaker-than-expected data coming out of the U.S., but the Fed certainly has limited scope to push through another large-scale asset purchase program as the recovery gradually gathers pace. Beyond the rate decision, we will be keeping a close eye on the updated forecast for growth and inflation, and we may see the FOMC start to lay out a contingent exit strategy as it looks to bring ‘Operation Twist’ to an end. As the committee moves away from its easing cycle, the shift in the policy outlook encourage a bullish forecast for the USD, but the technical outlook paints a different picture for the dollar as it threatens the upward trend from earlier this year. As the bearish divergence in the relative strength index continues to cast a weakened outlook for the greenback, the market reaction to the rate decision should provide a clearer forecast for the dollar, and the fundamental developments coming out of the world’s largest economy is likely to have a greater impact in dictating price action for the reserve currency as the Fed talks down speculation for additional monetary support.

Three of the four components weakened against the greenback, led by a 0.15 percent decline in the British Pound, and the sterling may face additional headwinds over the near-term as the U.K. faces a double-dip recession. Indeed, the dismal 1Q GDP report is weigh on the GBPUSD, and the short-term pullback in the exchange rate may turn into a larger correction as the pair appears to have carved out a top ahead of 1.6200. As the relative strength index tops out at 65, the British Pound may continue to pare the advance from earlier this month, but we should see former resistance around 1.6000 come in as support. As the GBPUSD maintains the upward trend from earlier this year, we will preserve our bullish outlook for the pound-dollar, and the sterling looks poised to track higher throughout the year as the Bank of England drops its dovish tone for monetary policy and turns its attention to the stickiness in underlying inflation.