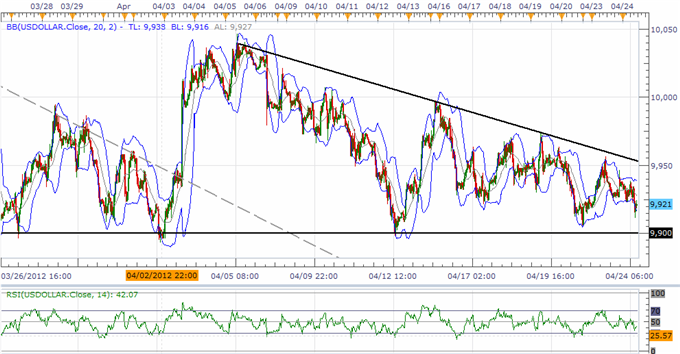 USD Continues To Build Base Ahead Of FOMC, JPY At Risk On BOJ Policy

Although the Dow Jones-FXCM U.S. Dollar Index (Ticker: USDollar) remains 0.09 percent lower from the open, we remain bullish on the reserve currency as it continues to find support around the 9,900 figure. As the FOMC interest rate decision takes center stage, the descending triangle may continue to take shape over the next 24-hours of trading, but the greenback certainly appears to be building a short-term base for a move higher as the Fed talks down speculation for another round of quantitative easing. Indeed, a less dovish statement paired with a higher forecast for growth and inflation may ultimately spark a bullish breakout in the index, and we may see the Fed adopt a mildly hawkish tone amid the stickiness in underlying price growth. 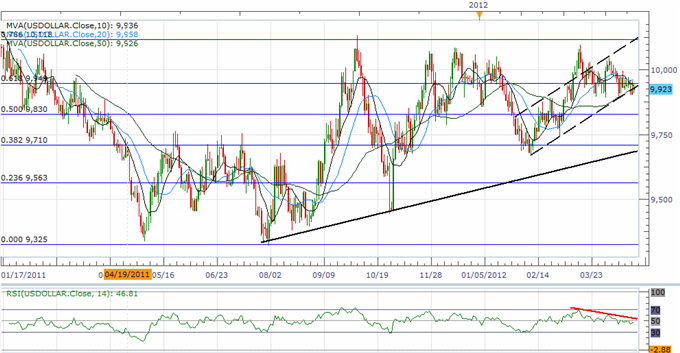 As the USDOLLAR continues to threaten the upward trending channel from earlier this year, we’re certainly keeping a close eye on the bearish divergence in the relative strength index, and the greenback may come under increased pressure should the Fed take additional steps to encourage a stronger recovery. Rather than pushing through another large-scale asset purchase program, the FOMC may look to extend ‘Operation Twist’ as its scheduled to expire in June, but it seems as though the Fed will gradually unwind its emergency measures as central bank officials become increasingly upbeat towards the economy. Indeed, FOMC board member Janet Yellen said the conclusion to ‘Operation Twist’ should not be seen ‘as a tightening of policy,’ and went onto say that she would only support more easing should the economic recovery falter. In turn, it seems as though the Fed will conclude its easing cycle towards the end of the year, and we may see the committee start to draw up a tentative exit strategy as growth prospects improve.

The greenback gained ground against two of the four components, led by a 0.13 percent decline in the Australian dollar, which was followed by a 0.01 percent drop in the Japanese Yen. As the USDJPY remains capped by the 20-Day SMA (81.59), we may see the pair continue to track sideways ahead of May, but the deviation in monetary policy could spark a sharp rally in the USDJPY as the Bank of Japan pledges to meet the 1 percent target for inflation. As the BoJ looks to carry out its easing cycle throughout 2012, the shift in the Fed’s policy outlook certainly instills a bullish forecast for the USDJPY, and it seems as though the pair has carved out a higher low in April as the relative strength index continues to come off of the lows. In turn, we may see the dollar-yen resume the advance from earlier this year, and the pair looks poised to mark fresh highs throughout 2012 as the Fed curbs bets for more easing.