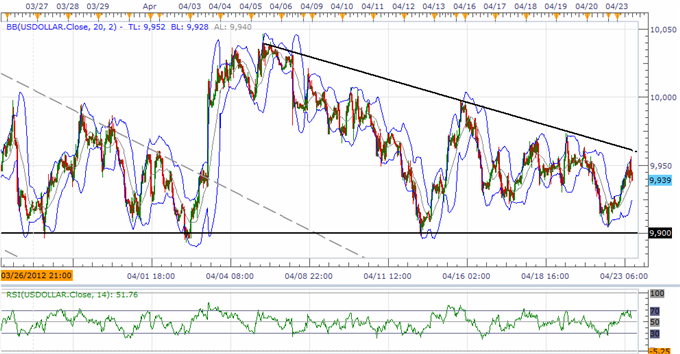 The Dow Jones-FXCM U.S. Dollar Index (Ticker: USDollar) is 0.36 percent higher on the day after moving 73 percent of its average true range, and we may see market participants turn increasingly bullish ahead of the FOMC rate decision as the central bank moves away from its easing cycle. Although the Fed is widely expected to maintain its current policy stance in April, the fresh batch of central bank rhetoric should prop up the dollar as central bank officials take note of the more robust recovery. In turn, we will maintain our bullish call for the USD, but we may see the dollar consolidate over the next 24-hours of trading as it remain stuck within a descending triangle. As price action approaches the apex, we may see the index continue to threaten support around 9,900, but the dollar certainly appears to be building a short-term base ahead of May as interest rate expectations pick up. 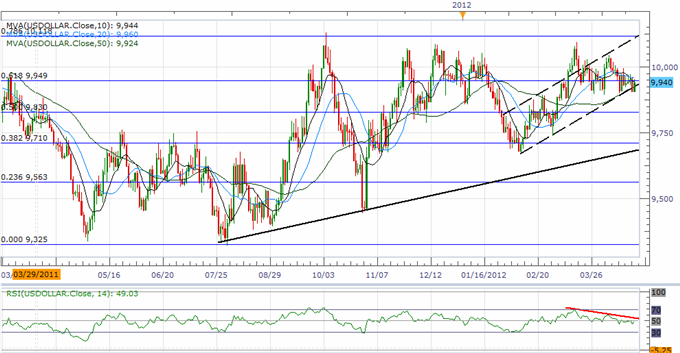 Indeed, it seems as though the USDOLLAR broke out of the upward trending channel from earlier this year following the sharp decline from Friday, and we may see the bearish divergence in the relative strength index continue to pan out as the greenback struggles to hold above the 61.8 percent Fibonacci retracement around 9,949. Nevertheless, as we expect the Fed to soften its dovish tone for monetary policy, the index may continue to carve out a lower high around 9,900, and the dollar could be setting up to make another run at the 78.6 percent Fib (10,118) as market participants look for higher borrowing costs. Credit Suisse overnight index swaps continue to reflect expectations for a rate hike as investors see the FOMC normalizing monetary policy over the next 12-months, and the shift in the policy outlook reinforces a bullish forecast for the USD as recovery in the world’s largest economy gathers pace.

Three of the four components weakened against the greenback, led by a 0.78 percent decline in the Australian dollar, and the high-yielding currency may weaken further over the next 24-hours of trading should the region’s consumer price report heighten speculation for a rate cut. As the Reserve Bank of Australia argued that ‘a case could be made for further easing of monetary policy,’ a soft inflation print would certainly allow the central bank to address the slowing recovery in the $1T economy, and speculation for lower borrowing costs could push the AUDUSD below 1.0200 as market participants increase bets for a rate cut. According to Credit Suisse overnight index swaps, market participants see the cash rate falling by nearly 100bp over the next 12-months, and the AUDUSD may weaken further in May as the fundamental outlook for the region deteriorates.