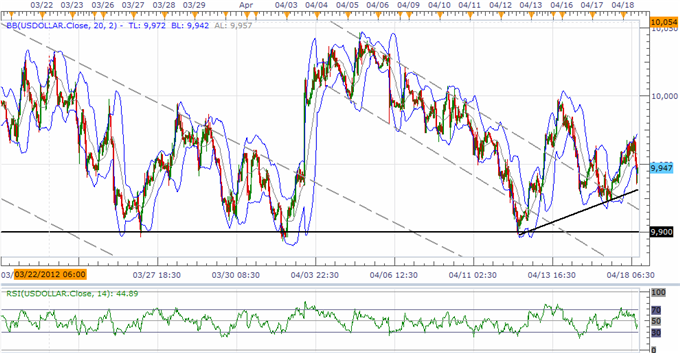 The Dow Jones-FXCM U.S. Dollar Index (Ticker: USDollar) remains 0.02 percent higher on the day after moving 62 percent of its average true range, and we should see the greenback track higher over the next 24-hours of trading as an upward trending appears to be taking shape. As the 30-minute relative strength index approaches oversold territory, we should see a rebound going into the end of the week, and the index looks poised to push back above 10,000 in the coming days as the shift away from risk-taking behavior gathers pace. Nevertheless, as Spain’s 10-Year bond auction comes into focus, a positive development may prop up market sentiment, but we may see easing demands for the periphery debt as European policy makers struggle to stem the risk for contagion. 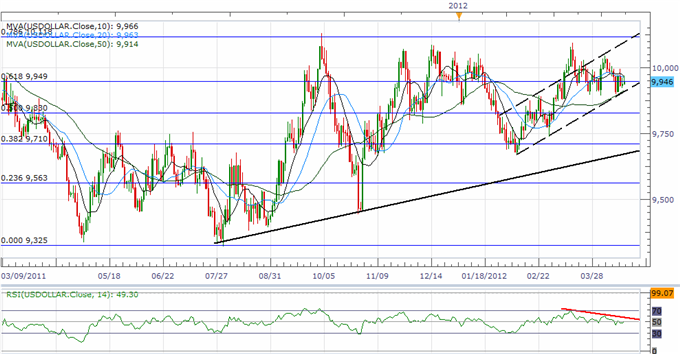 Although the upward trend in the USDOLLAR continues to take shape, we are keeping a close eye on bearish divergence in the RSI as it foreshadows a larger move to the downside. In turn, the oscillator needs to make a move towards 60 to reinforce our bullish outlook for the dollar, and we will continue to look for another run at the 78.6 percent Fibonacci retracement around 10,118 as the index looks poised to make a higher high. However, as the Group of 20 kicks off its two-day meeting in Washington, hopes surrounding the conference may dampen demands for the reserve currency, and we may see world policy makers try to talk down the risks surrounding the global economy in an effort to prop up investor confidence.

Three of the four components weakened against the greenback, led by a 0.52 percent decline in the Japanese Yen, while the British Pound advanced 0.58 as the Bank of England scaled back its dovish tone for monetary policy. As the BoE continues to talk down speculation for more quantitative easing, we should see the Monetary Policy Committee preserve its wait-and-see approach throughout 2012, but the central bank could be laying the ground works to start normalizing monetary policy amid the stickiness in price growth. As the MPC continues to talk down the risk of undershooting the 2% target for inflation, we should see the upward trend in the GBPUSD gather pace, and the shift in the policy outlook should push the pair to fresh 2012 highs as the fundamental outlook for the U.K. improves.