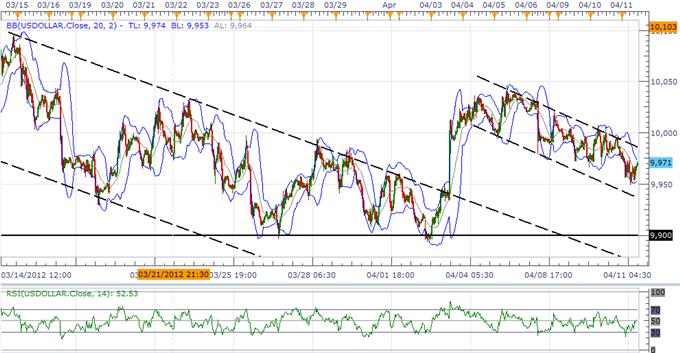 USD Index Continues To Build Base, AUD Correction To Be Short-Lived

The Dow Jones-FXCM U.S. Dollar Index (Ticker: USDollar) is 0.49 percent lower from the open after moving 97 percent of its average true range, and the greenback looks primed for a corrective bounce as the 30-minute relative index comes off of oversold territory. As long as the 9,900 figure holds up as support, we will maintain our bullish outlook for the USD, and the dollar should track higher over the near-term as it continues to carve out a higher low in April. In turn, we may see the greenback make an attempt to break out of the bearish pattern from earlier this month, but we may see the reserve currency hold steady throughout the remainder of the week as Fed officials preserve their 2014 pledge for the zero interest rate policy. 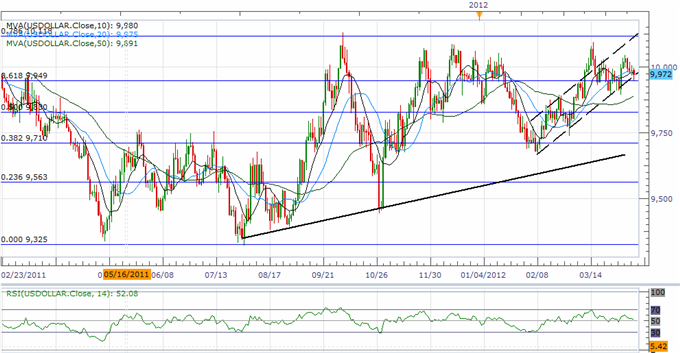 Indeed, FOMC voting members Janet Yellen and William Dudley endorsed the ‘highly accommodative policy stance’ amid the ongoing slack within the real economy, but saw little scope for another large-scale asset purchase program as ‘the recovery may be getting better established.’ In light of the recent rhetoric from the Fed, it seems as though the central bank is looking to conclude its easing cycle this year as the economy gets on a more sustainable path. As central bank officials continue to talk down expectations for another round of quantitative easing, the shift in the policy outlook continues to foster a bullish outlook for the USD, but the technicals certainly tell a different story as the index fails to maintain the upward trend from earlier this year. As there bearish divergence in the relative strength index takes shape, the development certainly points to additional USD weakness, but we may see fundamentals play an increased role in driving the dollar as the Fed starts to lay the ground work to normalize monetary policy.

Once again, three of the four components gained ground against the reserve currency, driven by a 1.30 percent advance in the Australian dollar, and we may see the high-yielding currency continue to retrace the decline from the previous month as the rebound in risk appetite gathers pace. Indeed, the jump in employment sparked a sharp rebound in the AUDUSD, with the exchange rate breaking out of the downward trending channel carried over from the previous month, but the recent move may ultimately turn out to be a short-term correction as market participants continue to see lower borrowing costs for the $1T economy. According to Credit Suisse overnight index swaps, investors are still looking for at least 75bp worth of rate cuts over the next 12-months, and the downturn in interest rate expectations continues to cast a bearish outlook for the Australian dollar as the region copes with a slowing recovery.