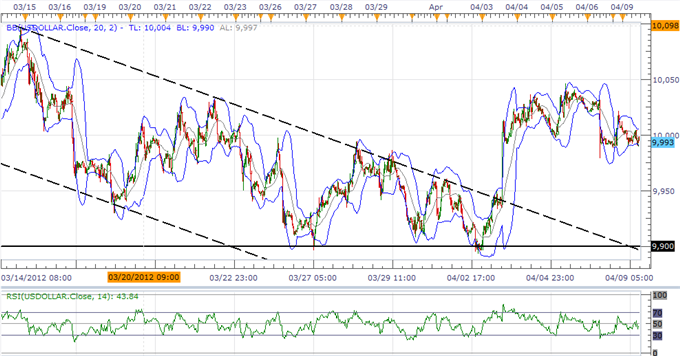 The Dow Jones-FXCM U.S. Dollar Index (Ticker: USDollar) is 0.02 percent lower from the open after moving 51 percent of its average true range, and we may see the greenback track sideways over the next 24-hours of trading as market participants remain offline for the Easter holiday. However, as Chairman Ben Bernanke is scheduled to speak at 19:15 GMT, the fresh batch of comments is likely to fuel increased volatility in the reserve currency, and we may see the central bank head talk down speculation for another large-scale asset purchase program as Fed officials anticipate to see a stronger recovery in 2012. In turn, the recent pullback in the USDOLLAR may provide a buying opportunity for currency traders, and we should see the greenback resume the advance from earlier this year as interest rate expectations pick up. 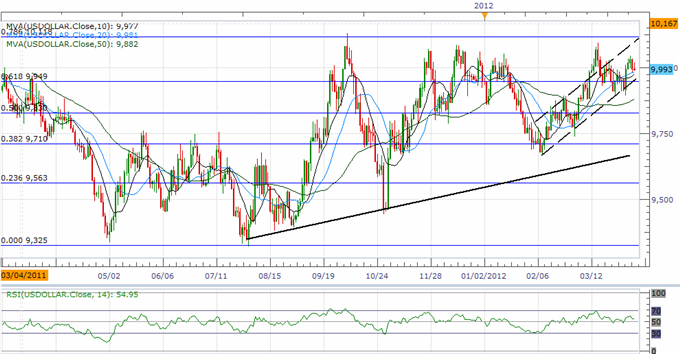 Indeed, speculation for QE3 resurfaced amid the dismal U.S. Non-Farm Payrolls for March, but we may see Mr. Bernanke continue to speak out against more easing as the world’s largest economy gets on a more sustainable path. According to Credit Suisse overnight index swaps, market participants are increasing bets for a rate hike over the next 12-months, and the shift in the policy outlook reinforces a bullish outlook for the USD as the Fed looks to conclude its easing cycle in 2012. As the index maintains the upward trending channel from earlier this year, we are still looking for another run at the 78.6 percent Fibonacci retracement around 10,118, but the slew of central bank rhetoric on tap for this week may bring about a bullish breakout in the index as Fed officials continue to take note of the more robust recovery.

Two of the four components weakened against the greenback, led by a 0.20 percent decline in the Euro, while the Japanese Yen gained another 0.38 percent ahead of the Bank of Japan interest rate decision. Although the BoJ is widely expected to maintain its current policy in April, the central bank may show an increased willingness to expand monetary policy further as it pledges to meet the 1 percent target for inflation. As the BoJ continues to carry out its easing cycle, the divergence in the policy outlook should prop up the USDJPY, and we may see the pair resume the advance from earlier this year as the fundamental outlook for the world’s third-largest economy remains weak.