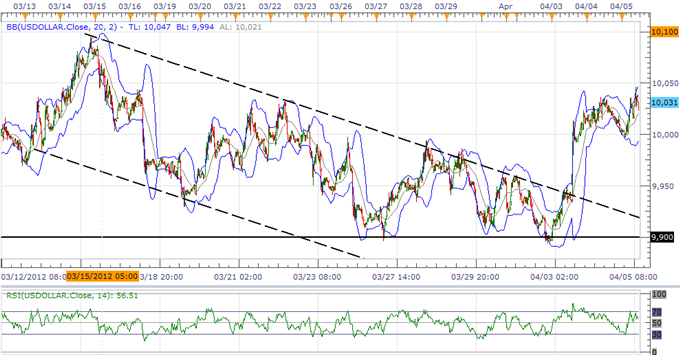 USD Index Looks To March Highs Ahead Of NFPs, AUD Weakness Ahead

The Dow Jones-FXCM U.S. Dollar Index (Ticker: USDollar) is 10 percent higher from the open after moving 75 percent of its average true range, and we may see the greenback appreciate further over the next 24-hours of trading as market participants scale back their appetite for risk. As the flight to safety spurs increased demands for the reserve currency, the dollar may make a run at the March high (10,097), but we may see a short-term correction as the relative strength index falls back from overbought territory. 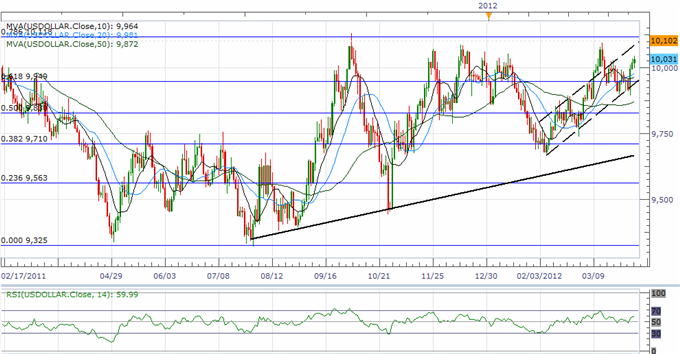 As NFPs take center stage, we’re expecting to see 205K rise in employment, and the ongoing improvement in the U.S. labor should help to prop up the greenback as it dampens speculation for additional monetary support. Indeed, St. Louis Fed President James Bullard endorsed a wait-and-see approach amid the more robust recovery, and warned that ‘additional policy actions may create an over-commitment to ultra-easy monetary policy’ while delivering a speech earlier today. In light of the recent rhetoric from Fed officials, it seems as though the central bank is looking to conclude its easing cycle this year, and the FOMC may pave the way to start normalizing monetary policy towards the end of 2012 as the recovery gets on a more sustainable path. As the USDOLLAR preserves the upward trending channel from earlier this year, we anticipate to see another run at the 78.6 percent Fibonacci retracement around 10,118, and the bullish sentiment underlining the reserve currency should continue to gather pace as the Fed softens its dovish tone for monetary policy.

Two of the four components lost ground against the greenback on Thursday, driven by a 0.60 percent decline in the Euro, while the Australian dollar advanced 0.38 against its U.S. counterpart. As the AUDUSD bounces back from the monthly low (1.0242), we may see the pair revert back towards former support around the 200-Day SMA (1.0396), but we maintain a bearish outlook for the exchange rate as it maintains the downward trending channel from March. It seems as though we’re seeing a short-term correction as the relative strength index holds the downward trend from back in February, and the pair may looks poised to give back the advance from earlier this year as interest rate expectations falter. According to Credit Suisse overnight index swaps, market participants are looking for more than 75bp worth of rate cuts over the next 12-months, and we may see currency traders turn increasingly bearish against the high-yielding currency as the fundamental outlook for the $1T economy deteriorates.