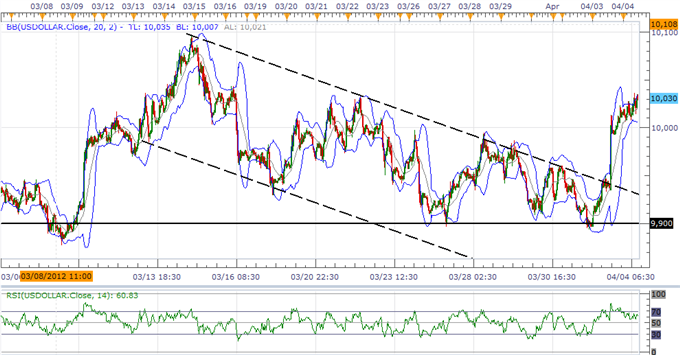 The Dow Jones-FXCM U.S. Dollar Index (Ticker: USDollar) is 0.33 percent higher from the open as renewed fears surrounding the debt crisis dragged on risk sentiment, and the greenback may continue to retrace the decline from March as the downward trending channel gives way. With support holding at 9,900, the index looks to have carved out a higher low in April, and the bullish sentiment underlining the reserve currency should gather pace in 2012 as the Federal Reserve continues to soften its dovish tone for monetary policy. As the highly anticipated U.S. Non-Farm Payrolls report comes into focus, we may see the dollar consolidate going into the end of the week, but a positive development should prop up the reserve currency as it dampens expectations for additional monetary support. 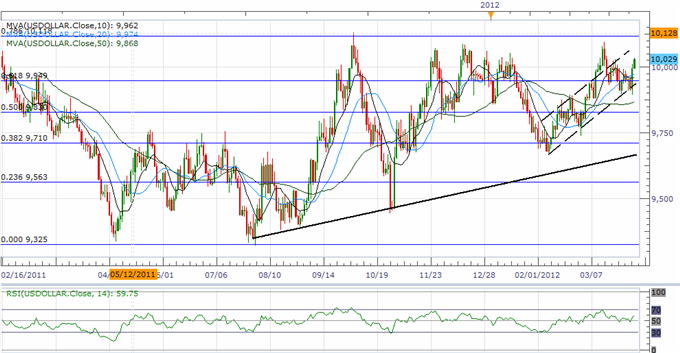 As the USDOLLAR maintains the upward trending channel from earlier this year, the greenback looks poised to make another run at the 78.6 percent Fibonacci retracement around 10,118, and we will maintain a bullish outlook for the reserve currency as the Fed continues to talk down expectations for another round of quantitative easing. Indeed, the shift in the policy outlook is likely to bear down on current risk trends that dictate price action for the major currencies, and we should see fundamentals playing an increased role in driving market volatility as FOMC looks to conclude its easing cycle this year. Nevertheless, the index looks poised for a pullback as it approaches the upper bounds of the channel, and we should see the dollar consolidate ahead of Friday’s employment report as market participants anticipate to see a slower rate of growth. However, in light of the recent trend, NFP’s may surprise to upside, and a strong rise in job growth should fuel a bullish response in the dollar as the fundamental outlook for the world’s largest economy continues to improve.

Three of the four components weakened against the greenback, led by a 0.79 percent decline in the Euro, while the Japanese Yen advanced 0.17 percent to maintain the range carried over from the end of March. Indeed, there’s speculation that the USDJPY has carved out a near-term top around 84.00, but the recent decline in the exchange rate looks more like a correction as the Bank of Japan maintains its pledge to meet the 1 percent target for inflation. Although the dollar-yen slipped below 82.00 over the last two weeks, the pair has yet to close below the key figure, and it seems as though the pair is building a short-term base for a move higher. However, should 82.00 fail to hold, we will be closely watching the 50.0 percent Fib from 2011 high to low around 80.50 to support.