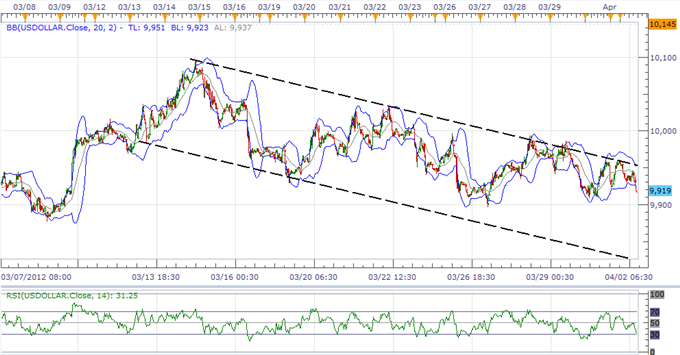 The Dow Jones-FXCM U.S. Dollar Index (Ticker: USDollar) is 0.35 percent lower from the open after giving back the overnight advance to 9,963, and the dollar may track lower over the near-term as it remains stuck within the downward trending channel carried over from the previous month. However, as 9,900 continues to provide interim support, awe should see a small correction over the next 24-hours of trading, and we may see the index threaten the downward trend should the central bank continues to soften its dovish tone for monetary policy. As the FOMC meeting minutes comes into focus, the policy statement is likely to heavily influence the dollar ahead of Friday’s Non-Farm Payrolls report, and the committee may sound a bit more hawkish this time around as central bank officials take note of the more robust recovery. 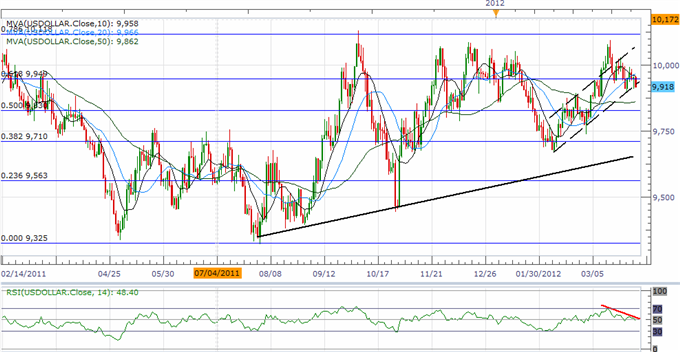 Although Dallas Fed President Richard Fisher said it’s too early to discuss tightening monetary policy, he struck down speculation for more quantitative easing as the recovery gathers pace, and it seems as though central bank officials are laying the foundation to start normalizing policy as growth and inflation picks up. At the same time, St. Louis Fed President James Bullard, struck a hawkish outlook for the world’s largest economy as global inflation raise the scope for higher prices in the U.S., and the shift in the policy outlook should strengthen the dollar as interest rate expectations gather pace. In turn, we should see the USDOLLAR maintain the upward trend from earlier this year, and the greenback may track higher in April as the fundamental outlook improves. However, we will be keeping a close eye on the relative strength index as there appears to be a bearish divergence in the oscillator, and we may see the reserve currency consolidate ahead of the FOMC Minutes as market participants weigh the prospects for future policy.

Three of the four components rallied against the dollar, led by a 0.98 percent advance in the Japanese Yen, but the recent strength in the low-yielding currency is likely to be short-lived as the Bank of Japan pledges to meet the 1 percent target for inflation. Indeed, BoJ Deputy Governor Hirohide Yamaguchi said the central bank will do the utmost to get the economy on a more sustainable path, and it looks as though the board will continue to carry out its easing cycle throughout 2012 in an effort to balance the risks surrounding the region. In turn, the deviation in monetary policy should continue to drive the USDJPY higher, and the pair looks to be building a based around 82.00 before we see another run up in the exchange rate.