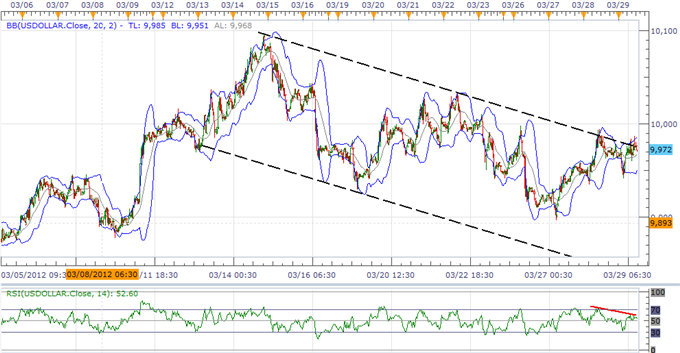 The Dow Jones-FXCM U.S. Dollar Index (Ticker: USDollar) is 0.01 percent higher from the open after moving 68 percent of its average true range, and the rebound may gather pace over the next 24-hours of trading as it continues to threaten the downward trending channel from earlier this month. However, as there appears to be a downward trend in the 30-minute relative strength index, the recent run up in the index could turn out to be a false break, and we may see the greenback continue to consolidate should Fed officials talk up speculation for more quantitative easing. 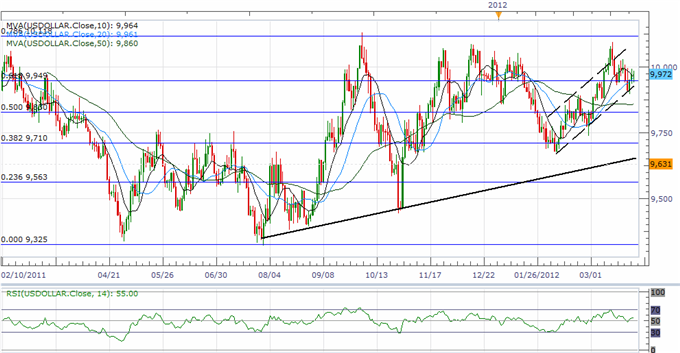 Atlanta Fed President Dennis Lockhart, who also serves on the FOMC this year, held an improved outlook for the world’s largest economy and talked down the spillover effects from the sovereign debt crisis as European policy makers increase their effort to stem the risk for contagion. At the same time, Philadelphia Fed President Charles Plosser warned that more monetary accommodation could put the U.S. on a treacherous path, and we should see central bank officials continue to soften their dovish tone for monetary policy as the recovery gathers pace. In turn, the Fed may show an increased willingness to conclude its easing cycle in 2012, and the committee may start normalizing monetary policy towards the end of the year as the economy gets on a more sustainable path. As the upward trending channel from earlier this year continues to take shape, we are still looking for another run at the 78.6 percent Fibonacci retracement around 10,118, and the bullish sentiment underling the dollar should gather pace as interest rate expectations pick up.

Two of the four components weakened against the greenback, led by a 0.50 percent decline in the Australian dollar, while the Japanese Yen rallied another 0.64 percent on Thursday amid the shift away from risk-taking behavior. Although the USDJPY slipped to 81.90 earlier this morning, we’re seeing the pair slowly regain its footing during the North American trade, and the pair may continue to retrace the decline from earlier this year as it looks to be carving a higher low ahead of April. As the Fed continues to soften its dovish tone for monetary policy, the Bank of Japan’s pledge to meet the 1% target for inflation should continue to push the USDJPY higher over the near-term, but the technical outlook paints a mixed picture for the pair as the relative strength index appears to be in a downward trend. As the USDJPY sits at a very critical juncture, seeing how the pair ends the month should help to generate a clear directional bias for April, but the shift in the policy outlook is likely to play an increased role in driving the exchange rate as the Fed looks to conclude its easing cycle.